October 18 Program: Marisa Bolognese, Director of Good Grief, Inc. in Morristown and volunteer Beth Karpowic of Chatham spoke about the mission of the organization. 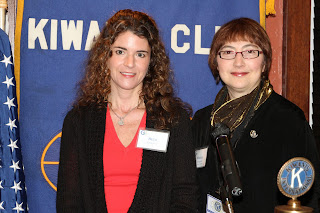 Children are often the forgotten mourners. Good Grief has been around since about 2004. It was formed by a group of people who had experienced the death of a parent or sibling when they were young, had not been given much support, and believed that more support was needed. Children need to be brought into the grieving processes and Good Grief serves as a resource for children.

In 2007 they started a center where they could give direct support to the families. The demand for services grew quickly to the point that there was a waiting list. In four years, they have grown over 300 percent and currently serve over 100 families. Free support is provided as long as it is needed.
Marisa narrated a story about a typical family served by Good Grief. The father died in a sudden tragic accident. Group counseling helped the two children and their mother deal with their grief over a necessary period of time.

Beth Karpowic shared a story about a mother who lost her young son a few years ago. The mother and her 4 year old daughter came to Good Grief. Beth described the opening circle ritual where everyone passes the baton, says their name and says who died. Following the circle, people go into separate groups and then return for a ritual at the end of the evening. After a period of a year, the mother was able to deal with the loss of her son. Beth invited everyone to be a volunteer for this important work. Training is provided and it is a rewarding job.

Funding is provided by contributions from individuals, foundations and businesses. There is no governmental funding.

Good Grief is located on Elm Street in Morristown and everyone is invited to come for tours. Check out the Good Grief web site to learn more and to schedule a tour.
Posted by Chatham-Madison Kiwanis at 10/21/2011 05:08:00 PM