Plambeck overviewed , which grew from the vision of a small number of leaders who wanted local residents to be able to raise healthy vegetables and flowers with their own hands. Dick described the careful planning and dedicated work that led to the first successful season of the Garden. Also present at the meeting was Master Gardener Marta McDowell who played an important role in planning the garden and making it an important part of . Many dedicated volunteers from diverse organizations came together to make the garden real.
Dick focused on the process for building and managing a community garden by presenting PowerPoint charts. He said a community garden is a shared area for individuals to plant, grow and harvest. It is also an opportunity to grow community spirit and expand ecological education.

Existing local and distant community gardens were reviewed to learn from past experience. Working with all involved in the project, Dick established rules for plot-holders to follow. The existing garden has 40 plots which are 10 feet square. Starting early in 2010 the garden was built, mostly by volunteers, on land near Division Ave. leased from PSE&G at $1 per year. Opening on May 1, all plots were planted by June 1.
Produce was harvested and 110 pounds of excess given to the Morristown Food Pantry. (Local press has followed the activities – click here to view ChathamPatch stories.) Tomatoes grown in the garden won the Chatham Farmers’ Market Tomato Cook-off contest during the summer. On June 17 the garden won the Morris Tomorrow McFlowertown Award.

Dick showed many interesting photographs during his program. Some photos were taken by Marta McDowell and you can view them on her ChathamCommunityGarden blog.

Looking into the future, the Chatham Garden leadership wants to build more plots to meet the demands of a waitlist of 48 applicants. Expansion near the present site and other sites is under study.

Dick has been making presentations to people in nearby communities, sharing Chathams’s experiences so that others can plan and build community gardens serving local residents.

Incoming Kiwanis President Dick Plambeck stepped into his new role a week early while Rich is away. He introduced guest Marta McDowell, reminded members to pick up new membership directories, reported that a Kiwanis leadership reference guide is available and reported on the Builders Club meeting he had attended. Also, Tom Mullen asked members to pay their annual dues quickly.  Betty Anne Keat reported on scheduling for Key and Builders Club meetings. Nancy Boucher handed out pasta tickets to be sold by members and announced that unclaimed tickets will be mailed to members. Dick Ligertwood asked members to bring newspapers to weekly meetings and he will take them to the club’s recycling center near the Chatham Post Office. announced that the clean-up went well. Joan May handed out sign-up sheets for the Madison Christmas Parade.  Sign-up sheets were also distributed for the Supermarket Nut Sales on November 20 and 21.
Posted by Chatham-Madison Kiwanis at 9/30/2010 10:20:00 AM No comments: 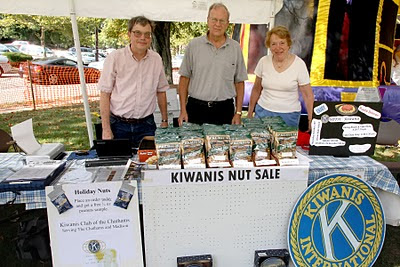 Kiwanis sold the first batch of nuts at the Chatham United Methodist Church Harvest Fair on September 25, 2010. Left to Right are Stu Shippey, Rich Behling and Nancy Boucher. This year, Stu is the Chairman of the Holiday Nut Sales Project. Sales went well and he plans to sell nuts at the Pasta Dinner on October 28.  Grocery store sales will be Nov. 20 and 21.  Use the Nut Sale Form link to order nuts. Also, paper orders can be given to Ron at the Sept. 28 Tuesday breakfast meeting.
Posted by Chatham-Madison Kiwanis at 9/26/2010 04:35:00 PM No comments: 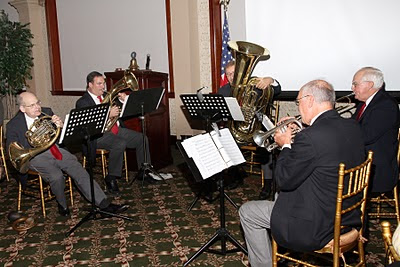 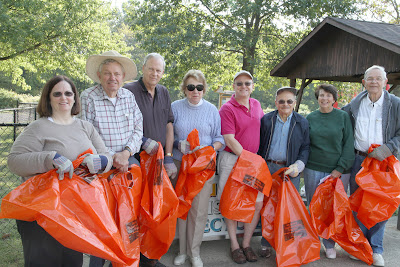 On Wednesday September 16, 2010 members of the Kiwanis Club volunteered their time to clean up the Passaic River trail next to Shepard Kollock Park. In warm sunny weather, eight Kiwanians grabbed orange plastic bags and set out into the woods between the baseball field and the river. The club does this work as part of the New Jersey Clean Community program. It took a couple of hours for the team to clean up the bottles, cans and other debris.
Posted by Chatham-Madison Kiwanis at 9/19/2010 05:51:00 PM No comments:

Lesley Parness presented a program on "Gardens of Morris County" to Kiwanis on September 14, 2010 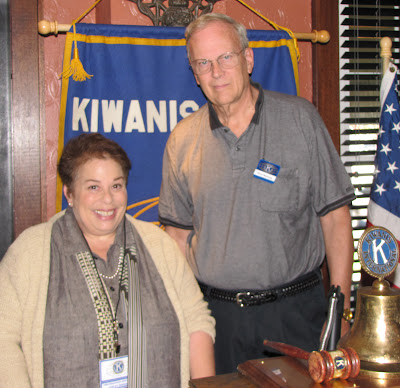 Rich Behling with September 14 speaker Lesley Parness, Superintendent of Horticultural Education at the Frelinghuysen Arboretum.  Title of her program was "Gardens of Morris County".
Posted by Chatham-Madison Kiwanis at 9/19/2010 05:45:00 PM No comments: 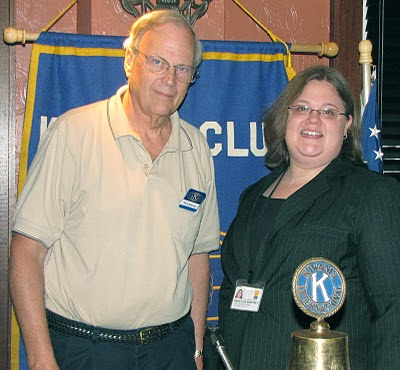