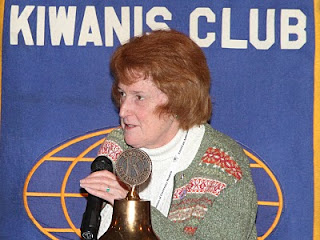 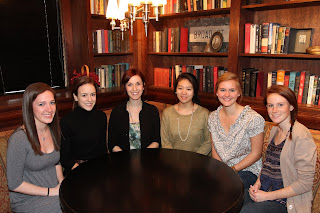 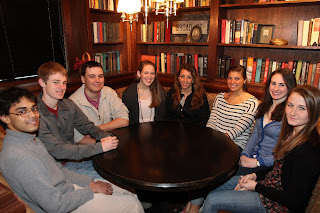 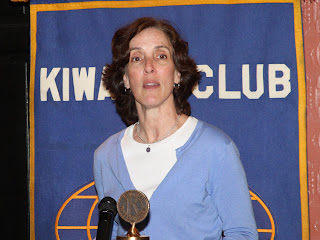 VP Joan May officiated at the March 22 breakfast meeting and announced that Fish and Chips food was ordered for pick-up next week. She also has submitted a request to Madison Borough for the Kiwanis Community Yard Sale to be held at Cole Park on May 21. Karen Swartz reported that the CHS Key Club will hold officer elections at the 7:30 PM meeting tonight. Nancy Holt reminded members that the Awards Reception will be held at Charlie Brown’s on April 12 and there will not be a regular club meeting on that day. She also asked that nominations be submitted for the Community Aid Award.
Posted by Chatham-Madison Kiwanis at 3/26/2011 09:40:00 AM No comments: 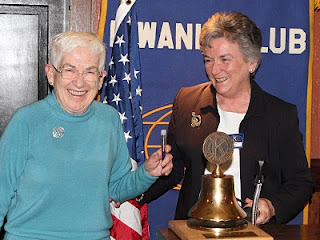 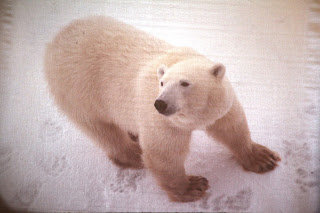 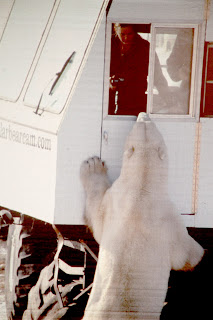 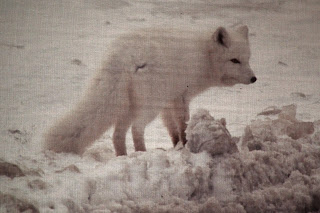 Between about October 15 and November 15, you can go to website www.polarbearcam.com and watch the bears. Photos are taken every 30 seconds. They also saw wolves, Snowy Owls and Artic Foxes. Also, they saw the Northern Lights. See photo of Artic Fox.
Residents of Churchill manage the local Polar Bears when they come into town. There is a bear jail where some are put. From the library in the Research Station, they could see bears through a window at night. She went to Churchill via airplane.
Posted by Chatham-Madison Kiwanis at 3/17/2011 10:52:00 AM No comments:


Alan reported that things are going pretty well for the Fish and Chips Dinner. He has more tickets if people need them. Also, please place posters where they can be seen. Ron and Betty Anne handed out posters to members who need them. Nancy Boucher announced Parsippany Club Wine Tasting on March 24. Nancy Holt asked for more nominations for the Community Aid Award. Rich announced that the recent Wine Tasting event will be discussed first at the March 16 Board Meeting. All members can come and leave the meeting when they want to.
Posted by Chatham-Madison Kiwanis at 3/17/2011 10:37:00 AM No comments: 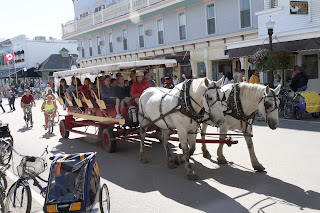 A multimedia show describing Mackinac Island, Michigan was presented by Ron Whalin. Located in Lake Huron, the entire island permits travel only by walking, bicycles, horseback and horse-drawn carriages. The island is about 8 miles in circumference and has about 15,000 visitors on a typical summer day. Ron and his wife participated in a “Road Scholar” program which began the day before Labor Day, 2010. People can travel to Mackinac Island via ferryboats, other types of boats or small airplanes (there is a small airstrip). 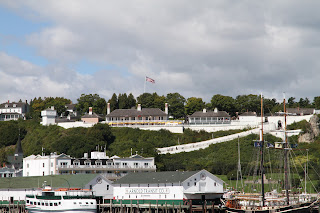 Ron showed photos of the many attractions which were viewed while riding in carriages and walking on some of the 60 miles of trails. The photo above shows Fort Mackinac. 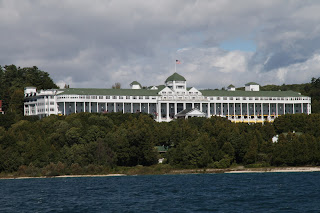 One afternoon, the class toured the Grand Hotel, one of the finest hotels in the USA and the site where the film “Somewhere in Time” was filmed. High Tea was served after which Road Scholars were free to explore the hotel on their own. 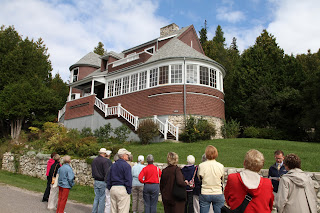 The above photo shows the class on a walking tour of historic summer cottages. These homes are generally occupied only in the summer and were built on land leased from the Michigan State Park on the island. 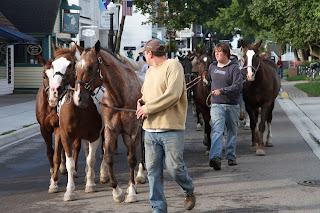 After Labor Day, almost all of the 700 horses leave the island for farms on the Upper Michigan Peninsula. Only about 20 horses remain on the island in the winter.
About 500 residents live on the island year-round and they can use snowmobiles to get around - to make the best of the difficult winters. The last ferryboat leaves the island in mid-January - the ice freezes solid. Some years, the ice is thick enough to support the “Ice Bridge”, a trail across the ice marked by left-over Christmas trees. Length of the bridge is about three miles. This year, the warm, windy February weather melted the Ice Bridge after only a few weeks of operation. Ron showed part of the movie “Ice Bridge”. 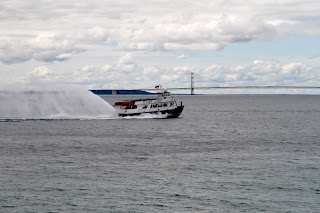 The above photo shows a ferryboat returning to St. Ignace on the mainland with the Mackinac Bridge (which links the Lower Peninsula to the Upper Peninsula) in the background. There is no bridge to Mackinac Island.
Posted by Chatham-Madison Kiwanis at 3/13/2011 08:49:00 PM No comments:

Betty Anne Keat announced that CHS Key Club is holding a Restaurant Day fundraiser at Friendly’s in New Providence on Thursday, March 10 from 5:00 to 8:00 pm. CHS Key Club is meeting Wednesday at 7:30 pm in the cafeteria. She also has Fish and Chips posters for placing on bulletin boards. Alan said preparation for Fish and Chips is going fine. Nancy Boucher announced that Parsippany Kiwanis will be having their 9th wine-tasting event on March 24 at Bretton Woods in Morris Plains with a served dinner and silent/live auctions, all for $65.  Nancy Holt spoke about the April 12 Awards Reception, 7:30 pm at Charlie Brown’s. NJ District Governor Marc Litwack announced that Nancy Boucher will be the 2011-12 NJ District Coordinator for the Kiwanis International Foundation.
Posted by Chatham-Madison Kiwanis at 3/13/2011 08:06:00 PM No comments: 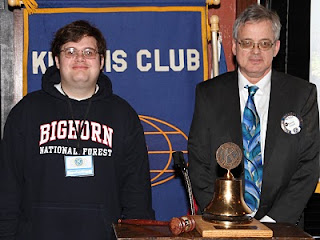 Madison lawyer, naturalist and photographer Mark Lloyd presented an outstanding digital slideshow featuring waterfalls you can visit in a “day trip”. The above photo shows Mark (left) being introduced at the Kiwanis meeting by his father, David Lloyd.
Mark described named and unnamed waterfalls. First were Silver Thread Falls (80 ft. high) and nearby Dingmans Falls which are both in Dingmans Ferry area, just off of PA route 209 at milepost 14. These two falls are an easy, pleasant walk from an NPS Visitor’s Center.
Next, he showed Raymondskill Falls, which is off of 209, north of Dingmans Falls and closer to the rt. 206 bridge to New Jersey. He hiked on a treacherous, washed-out trail to view and photograph the falls, which is the highest (208 ft.) in Pennsylvania. He showed a photo of the deep pool of water which feeds the falls.

Next, he showed Tillmans Ravine, which is in Sussex County, New Jersey just off of Rt. 206. 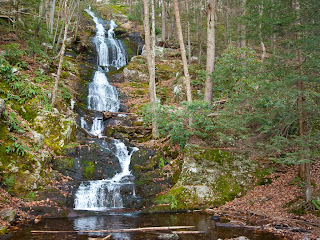 He told the audience about a beautiful New Jersey secret, Buttermilk Falls (see above photo), which is located in the Delaware Water Gap National Recreation Area near Walpack. Mark mentioned the recent Star-Ledger article about “ghost town” Walpack Center, NJ.
Mark showed photos from Shawangunk Mountain Ridge (The Gunks). This is a beautiful area in New York State, about 10 miles west of New Paltz, exit 18 on Interstate 87. The Minnewaska State Park Preserve has 5 lakes, like pools trapped in an uneven asphalt road. Mark showed the Awosting creek on the mossy glen trail and Rainbow Falls. There is some difficult hiking (and wading) to see a number of waterfalls between more easily traveled carriageways in the park.


The former George W Childs State Park in Pennsylvania is a few miles upstream from Dingmans Falls. Mark showed photos of a few of the many waterfalls in this area. The park is now called the George W. Childs Recreation Site and it is part of the Delaware Water Gap National Recreation Area.

Ricketts Glen State Park is in Pennsylvania, exit 236 on rt 80 and then north on 487. A park ranger told Mark that this place was one of the most spectacular places he had seen. Mark and David traveled there during peak leaf season and they agree it is a special place. The park was once owned by lumber magnet, who thought it was so nice he never harvested the trees and now the forest is very old. Rickets left his property to the state of Pennsylvania. There are 23 named waterfalls and Genoga Falls is the largest, about 90 ft high.

After introducing scenic areas and falls, Mark showed photos of the attractions in different seasons and from different viewpoints. He gave anecdotes and showed the rivers feeding and leaving the waterfalls.

Mark ended the show with icy winter photos of Dingmans Falls (see photo below), Raymondskill Falls, and Awosting Falls, which is in Minnewaska Park. 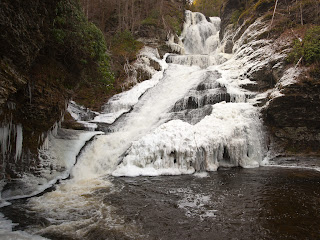 The Chatham High School Key Club is holding a Restaurant Night fund-raiser to benefit the Children’s Specialized Hospital on Thursday, March 10 from 5:00 to 8:00 PM at Friendly’s Restaurant in New Providence (75 South Street). Betty Anne announced that Ten percent of customers’ bills will be donated to the Hospital. You can do take-out as well as eat-in. Alan Robertson reported that Fish and Chips placemat adds are doing fine. Other preparations are going fine. Gary Arnesen reported that Chatham Boro clean-up will be rescheduled from April to May or later in the year. Nancy invited members to the 7:30 PM April 12 Awards Recognition Reception to be held at Charlie Brown’s. Checks will be given to Benevolence recipients and a special Community Aid Award will be given to someone selected by Kiwanis. Members are requested to nominate candidates.  Rich gave a quick update on the successful Wine-Tasting event. He asked for feedback on the event. Members were asked to submit any last minute bills within the next two weeks. A very high percent of members participated in the event. Dick noted that the Wine-Tasting was a great Kiwanis Team event.
Posted by Chatham-Madison Kiwanis at 3/04/2011 10:54:00 AM No comments: