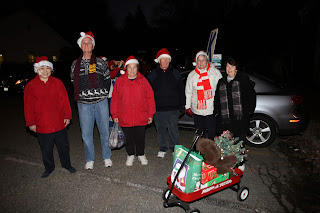 Kiwanis members and spouses started gathering at 5:00 pm. It was warmer than last year. 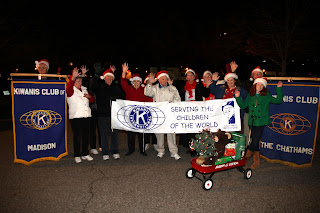 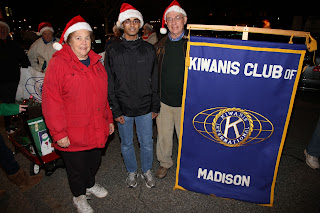 The Treasurer (middle) of the Madison High School Key Club marched with Kiwanis. 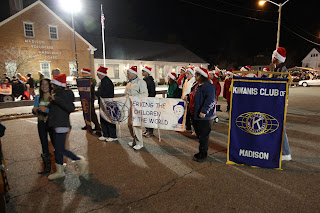 At about 5:40 PM, the Kiwanis marchers lined up near the Madison Volunteer Ambulance Corps building. 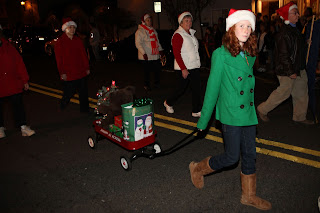 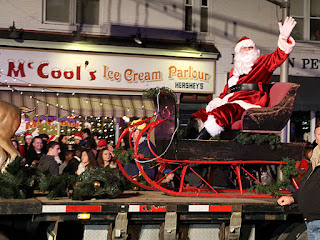 After we reached the end of the parade route, the marchers waited for Santa to go by on the final float.
Posted by Chatham-Madison Kiwanis at 11/26/2011 04:17:00 PM No comments: 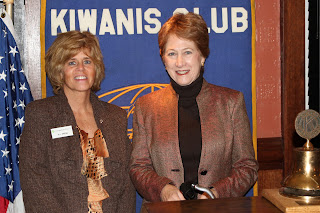 Today, an estimated $5 billion of life insurance policies are sold through the Life Settlements market each year.

The process involves many factors which potential sellers should examine before taking this step. Susan handed out literature explaining the process. Click here to go the Integrity Life Settlements website and learn more.
Posted by Chatham-Madison Kiwanis at 11/23/2011 02:44:00 PM No comments:

Karen Shippey announced that last weekend’s Nut Sales at the Supermarkets went very well and we are about out of all bagged nuts. There are still plenty of nuts in gift tins: deluxe mixed nuts, cashews and kiwis. She asked all members to accelerate their sale of these items. We are about at the breakeven point. Next, we need to sell all the remaining nuts so we will have funds to put into scholarships and youth programs.

Gary Arnesen reported that the clean-up of the Passaic River Trail near Shepard Kollock Park in Chatham Borough went very well. Because of the storms this year, the work was pretty tough. He thanked all the participants. Click here to see photos on Chatham Patch.

Joan May reminded everyone about the November 25 Madison Christmas Day parade. We will gather in the Ambulance Corps parking lot starting at 5:00 pm. Club members are invited to meet Joan at Charlie Brown’s after the parade. Click here to view the Madison Patch article about the parade. Joan also reminded everyone to help with “Breakfast with Santa” to be held on December 3.

Betty Anne Keat told members that the Chatham Middle School is selling Entertainment Books and asked members to buy one.
Posted by Chatham-Madison Kiwanis at 11/23/2011 02:35:00 PM No comments: 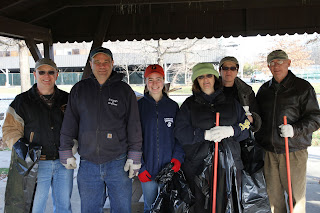 On Saturday November 19, members of Kiwanis, Chatham DPW and the CHS Key Club President helped clean up the trail that starts at Shephard Kollock Park and goes along the beautiful Passaic River. Click here to see more photos on Chatham Patch.
Posted by Chatham-Madison Kiwanis at 11/21/2011 10:30:00 AM No comments:

Kiwanis Sells Nuts at Local Supermarkets the Weekend Before Thanksgiving 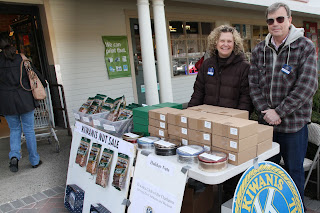 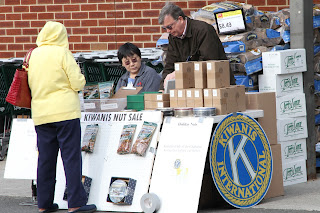 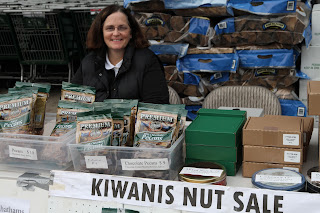 Sharon sells nuts at entrance to Kings Supermarket in Chatham Borough
Posted by Chatham-Madison Kiwanis at 11/21/2011 10:24:00 AM No comments: 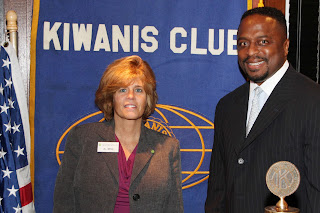 Michael Lupton of Wells Fargo Advisors in Morristown was introduced by Jill Greg. Michael is a graduate of the US Naval Academy and has a Master’s in Business from Duke University. He served in the US Marines as a helicopter pilot.

He handed out literature on “non-spousal IRA” and “The benefits of the stretch IRA strategy.” As a Financial Advisor, he keeps track of the market and noticed on his Blackberry that the market was down again today. The economy and market have been tough in recent years with the latest problems being financial problems in Greece and Italy.

Locally we see business failing and inadequate funding for governments and schools. We wonder if there is anything we can do to insulate ourselves from these problems and realize benefits in the long term.

He introduced and explained a concept called “stretch IRA”. Wells Fargo clients are using this to more effectively pass funds to non-spousal beneficiaries. Michael stressed that he is not a tax attorney and that everyone should consult their own estate planning advisor. The concept is to stretch the assets out over a longer period of time, which will provide more time to recover value.

The approach benefits people which multiple sources of income who want to pass some IRA funds to beneficiaries. It is important to carefully select the beneficiaries. If they are young, the income from Required Minimum Distributions will be stretched over a longer period of time. There are many options for setting this up for non-spouse beneficiaries.

Over time, the market will recover and get better. This concept lets you park your investments so that they will last longer and you can leave your legacy to your family. It is important, especially in this down market, to periodically review you financial plans and to make prudent decisions. Click here for more information.
Posted by Chatham-Madison Kiwanis at 11/16/2011 11:53:00 AM No comments:

Gary Arnesen announced the November 19 cleanup of Shepard Kollock Park in Chatham Borough from 9am to 10am. Karen Shippey reported that the total Nut Sales for last weekend at Madison Stop and Shop and Florham Park Kings was $940. Total is now $6,602. We are sold out of Bagged Mixed Nuts, Bagged Cashews and Peanuts in a 12-oz can. She also reminded members about next weekend’s ShopRite and Kings Supermarket sales in Chatham. There are a few unfilled time slots for members to sign up for and she sent the sheet around to members at the meeting. John May passed around sign-up sheets for the 5pm November 25 Madison Christmas Parade and the Breakfast with Santa on December 3 (helpers needed 8:30 am to 12:00 noon). Mary Anne announced the NJ Kiwanis District Governor’s meeting to be held on December 1, 6:30 pm at the Mt. Tabor Golf Course. She also announced that due to schedule conflicts, the Wednesday 11/16 Board meeting will be changed to November 22 immediately after the breakfast meeting. Several projects for 2012 will be discussed at the Board meeting. Marge Ahrens circulated a card for Mal. A CHS Key Club meeting is scheduled for 11/16 at 7pm. The MHS Key club will meet on Thursday at 2:45pm in the cafeteria.
Posted by Chatham-Madison Kiwanis at 11/15/2011 06:05:00 PM No comments: 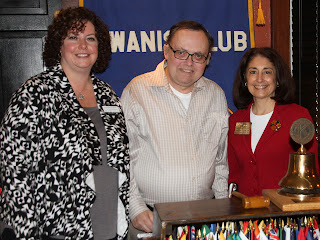 Employment Horizons, located in Cedar Knolls, NJ, provides jobs for people with special needs. Lisa told Kiwanis that the organization is a private, not-for-profit agency which started in 1957.  They have a large facility on Ridgedale Ave. About 130 folks with disabilities come every day to do contract work such as package assembly for major corporations like Cablevision. Workers refurbish TV remote controls. Work is also done for Tiffany, the jewelry company. They have helped Bayer, the German drug company, prepare documents for a seminar. Promotional mailings are also processed for clients.

They now have a document management center and can help companies with their paper records. They do document scanning, imaging and shredding. Quality and confidentiality are controlled with the assistance of Employment Horizons staff.

Janitorial services are provided. For example, they serve the entire grounds at Picatinny Arsenal with about 100 people. They also provide cleaning services for the Town of Denville.

Gary Sloan talked for a few minutes about his position working for Pediatrics Ophthalmology Associates.

Lisa answered questions from the audience and asked Kiwanis members to consider Employment Horizons to obtain services (click here for more info).
Posted by Chatham-Madison Kiwanis at 11/11/2011 11:47:00 AM No comments:

President Mary Anne Maloney reported on cancellation of the November 2 meeting. Due to the power outages and other damage caused by the major October 29 snowstorm, it was necessary to cancel the meeting. A telephone calling team tried to reach all members and an email was sent out to all members using the Internet network access provided by the Library of the Chathams. In spite of diligent efforts, two members did travel to Charlie Brown’s Restaurant and found it closed where a sign “No Kiwanis Meeting” was posted on the door.

Mike Mulhaul was present for the Interclub and he also thanked the members for working at the event. It was a great evening. Also, he invited members to attend the Greater Parsippany Kiwanis 20th Anniversary Celebration, 6:30 PM, December 5 at the Mountain Lakes Country Club.

Mike also announced that he is the NJ District Coordinator for the ELIMINATE project. He plans to give a talk to our club on the subject early next year. ELIMINATE is a four-year program to raise $110,000,000 to eliminate Maternal Neonatal Tetanus world-wide. New Jersey needs to raise $1,064,444.

Gary Arnesen announced that the final income from the Pasta Dinner was $1,793. He also announced that there will be a Kiwanis town clean-up held on Saturday, November 19 at Shepard Kollock Park. Time will be announced next week.  Dick Plambeck added that the Environmental Commission is doing a major cleanup of that area of Chatham Borough. DPW will be out there with chain saws, wheelbarrows and chips to clean up and restore the trails in the area. Boy Scouts and other volunteers will also be out there working.

Stu Shippey reported that we are almost at the halfway point in selling Holiday Nuts. However, we have a lot more selling to do. There are four supermarket sales coming up the next two weekends. He needs more volunteers and passed around a sign-up sheet.

Mary Anne reminded everyone about the November 12 ELIMINATE walk in Cape May and the ELIMINATE Bermuda cruise next year.

John May passed around sign-up sheets for the Madison Christmas Parade and the Breakfast with Santa on December 3.
Posted by Chatham-Madison Kiwanis at 11/10/2011 09:40:00 AM No comments:

Members from other Kiwanis Clubs in the North Jersey area attended our November 8 regular luncheon meeting at Charlie Brown’s in Chatham Township. Here are photos of our guests. 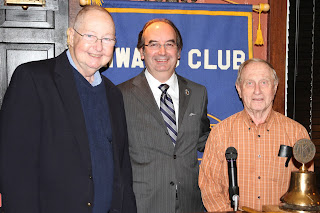 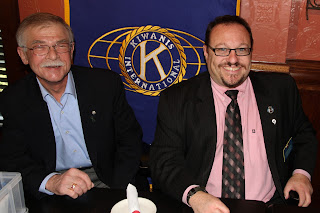 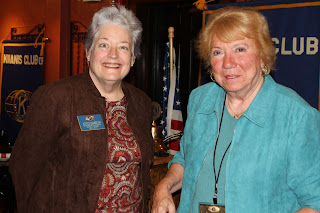