Mal Kitson announced Independence Day Parade. Mary Anne Maloney asked members to bring staple guns to decorate lady liberty float. Meet at 4:00 PM Sunday July 3 behind Weichert’s on Main St. in Chathm. Nancy Boucher reminded members to help decorate the Chatham Band float at Coviello’s in Madison, 8:00 AM on the 4th of July. The American Flag holder will be provided. Members report to march at intersection of Ogden and Hillside. Next Board meeting is Wednesday, July 20, Chatham United Methodist. Nancy Boucher will hold a dinner meeting, 6:00 PM July 13, at her house to plan for managing this year’s District Convention (we are the host club). Through this summer, Karen Swartz will collect small unused travel toiletries (saved from hotel stays) contributed by members and give them to the NJAS/Eric Johnson House. Also, bring in unused dental goody bag items. Today, members bought $240 in Supermarket Cards from Nancy Boucher for contribution to NJAS.
Posted by Chatham-Madison Kiwanis at 6/29/2011 07:50:00 AM No comments: 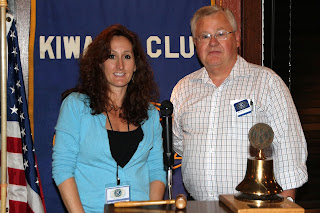 Laurie has been with the Eric Johnson house since it was founded in 1994. She presented a history of the organization.  Early residents of the EJ house with Aids had no options and have passed away. Later, medical treatments became available so residents lived longer and have broader needs. The organization provides many services and tries to deliver them efficiently. Some clients have improved enough that they go off welfare.

A major goal is to provide education to people ranging from middle schools thru college students on up to the older adults.  Unfortunately, the population has lost interest in education because there is medical treatment now. But the problem is still very bad. There is continuing discrimination and unfair treatment of HIV/Aids patients. June 5 1981 is the first recorded date of HIV. After 30 years there is still a lot of misunderstanding.

NJAS worked with other NJ organizations to have a single Aids Walk for raising funds and awareness. Volunteers are helpful in many tasks, like driving people to appointments. ShopRite gift cards are used to buy groceries. Service organizations are urged to hold food and household product drives. Laurie left members a list of items that are needed.

New Jersey has about 75,000 reported HIV cases with almost 35,000 still living.  About 1100 HIV patients live in Morris County. The rate of infection has not decreased, world-wide. To learn more, please visit the NJAS website http://www.theericjohnsonhouse.org/
Posted by Chatham-Madison Kiwanis at 6/24/2011 04:45:00 PM No comments:

Nancy Holt announced that there will be a Benevolence Committee meeting 6/28 after breakfast. Dick Plambeck reported that he made presentations at CHS, ECLC and MHS awards events and passed around several thank-you notes for review by members. A thank-you was also received from the “Save-a-Child” movement.  The Geralda Farms concert is June 26. Mal Kitson reminded everyone about the July 4th parade. Nancy Boucher reminded that we are the host club for the District Convention.
Posted by Chatham-Madison Kiwanis at 6/24/2011 04:31:00 PM No comments: 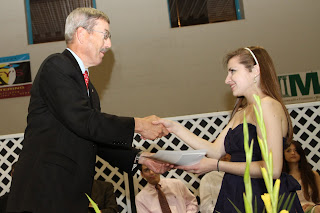 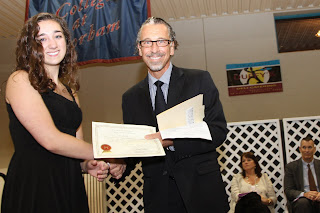 Madison Musician Jerry Vezza presented the Jerry Vezza Award for Outstanding Accomplishment in the Field of Music to Elizabeth Meek.  The award, sponsored by Kiwanis, is given to a graduating senior who has a love for music with passion, discipline and dedication to excellence in the art of music. Elizabeth has been a member of the MHS orchestra for four years, where she has been a leader in the cello section. At the awards ceremony, she was also recognized for her work as Submissions Editor of the “Glyphs”, the Literary Magazine. At the end of the ceremony she was recognized for her membership in the National Honor Society, Presidential Award for Academic Excellence, and National Merit Society – Commended.
Posted by Chatham-Madison Kiwanis at 6/18/2011 09:38:00 AM No comments: 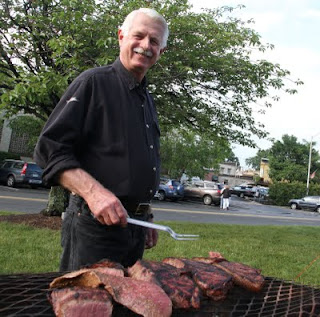 Ed Kostrowski, incoming President of the Chatham, Millburn and Short Hills Rotary Club barbequed London broil at the Kiwanis-Rotary picnic held at the Chatham Borough Firehouse on June 14, 2011. The Kiwanis-Rotary picnic is held every year. The clubs alternate serving as host – this year, Rotary was the host. It is a great opportunity for the two service clubs to socialize and exchange ideas.
There was a huge rain shower just before the picnic, but about 6:00 PM, the sky brightened, the rain stopped and the sun came out.  The picnic was just ending when the showers returned, so everyone went inside the firehouse to enjoy a last cup of coffee.
The food was excellent and everyone had a great time. Total attendance was 25, which was great, considering the rainy weather.
The Rotary club holds three meetings per month at Enzzo’s Trattoria in Milburn and one meeting per month at the Library of the Chathams. 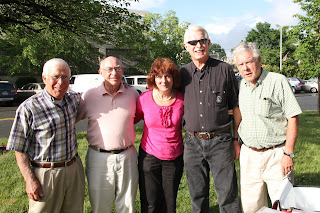 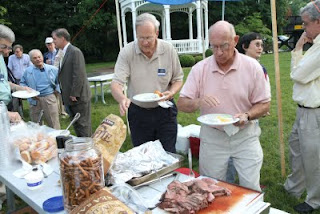 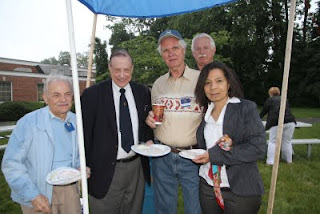 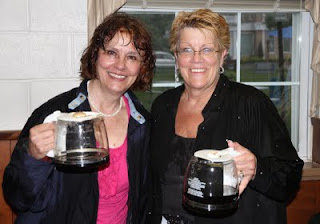 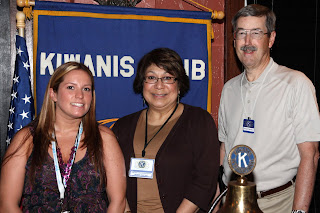 For over 110 years, Visiting Nurse Association of Northern New Jersey has provided quality health care to residents of the greater Morris County area.  In photo above, Dick Plambeck welcomed Visiting Nurse Association speakers Mary Cuoski (L) and Deborah Castro (R), who gave a comprehensive presentation on the organization and its services. The population is living longer and the many older citizens require assistance. Over 44 million American adults provide care for an aging loved one, and that number will rise. VNANNJ provides help and support for the care givers.
Respite Care is offered to provide a break for someone serving in the caregiver role. HHA service a provided to relieve full time caregivers of their workload. The Friendship House Adult Day Care Services are offered to those with Alzheimer’s.  Community Health Programs include In-Home Caregiver Education, House Calls for Groceries, Philips Lifeline and Telehealth. Medicare can help recipients who are eligible.
How can the VNANNJ help? They are a Medicare certified Homecare agency in Morris County, provide all services required and will work with your MD to plan care. Call them at 1-800-WE-VISIT or go the website: http://vnannj.org/.
Posted by Chatham-Madison Kiwanis at 6/08/2011 11:46:00 AM No comments: 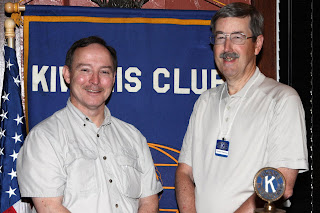 Dick Plambeck (R) introduced Al Thomas (L), Senior Executive for the Fishawack District of the Patriots’ Path Council, Boy Scouts of America. Al was visiting to share ideas for helping young people and to explore partnerships with the Kiwanis Club. Erv Martin reported attending the Kiwanis Club of LeMars Iowa meeting and reported on their club activities. The Senior Center of the Chathams sent our club a letter with a donation in honor of the fine work of the CHS Key Club, which baked deserts for the recent senior fund-raiser.  Betty Anne reminded members to attend the final CHS Key Club meeting of the year. The year-end celebration will start about 2:30 PM June 8 in the cafeteria. Tom Mullin passed around the sign-up sheet for Fishawack. He needs people for this coming Saturday afternoon.  John Hadamuscin needs people to help pull pork on Friday at 1:00 PM at the Methodist Church.  Mal Kitson reminded everyone to get ready for the 4th of July parade. Sign-up sheets were passed around for decorating the “Lady Liberty” float at 4:00 PM on Sunday (July 3) at Chatham Main and the band float at 8:00 AM on Monday (July 4) at Coviello’s. Members should march with the floats in the parade.  ECLC graduation ceremony and MHS awards ceremony at FDU are both on June 16. Dick reminded everyone about the District Convention. He also reminded them to vote today. Next week’s Tuesday meeting will be the annual Kiwanis-Rotary picnic starting 6:00 PM at Firehouse Plaza.
Posted by Chatham-Madison Kiwanis at 6/08/2011 11:39:00 AM No comments: 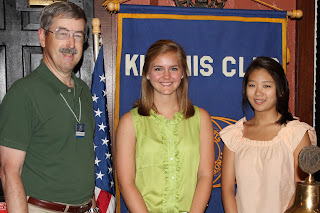 Year-2011 Chatham Kiwanis Scholarship winners Annie Monson (left) and Christina Kim (right) were introduced by Kiwanis Club President Dick Plambeck at the May 31 Kiwanis breakfast meeting. They will also be recognized at the June 24 CHS graduation ceremony as this year’s winners of $8,000 Kiwanis Chatham High School scholarships. Students receive $2,000 per year for four years.
Posted by Chatham-Madison Kiwanis at 6/03/2011 05:37:00 PM No comments: 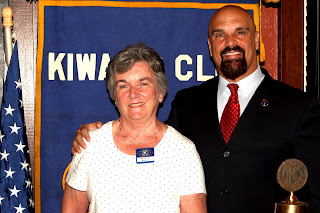 Detective Supervisor Mark Castellano of the Morris County Prosecutors Office was introduced by Mary Anne Maloney at the May 31 Program. The speaker described several frauds that members should watch out for. Topics included email scams and identity theft. Ways to protect against criminals were presented.

Seniors who are targeted have money, are polite, trusting and reluctant to admit being duped. Scam emails are carefully crafted to sound real and to appeal to the targeted person’s emotions. The email sender asks for money with the promise of paying it back. If people receive emails like this, they should become suspicious and close examination will probably show “defects” in the email they received. People who receive this type of email should just delete it.

If homeowners deal with contractors, they need to make sure that they are reputable. They should be registered with the state of New Jersey. Ask for written estimates and check references. Check with the municipal government regarding a contractor. Tell the contractor you will not pay more than the original estimate.

If an unsolicited call comes to your phone line from someone asking questions, be sure to give no information to the caller. It is better to just hang up on the caller.
Posted by Chatham-Madison Kiwanis at 6/03/2011 05:22:00 PM No comments: 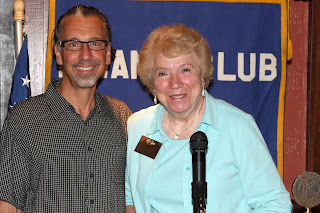 Nancy Boucher introduced Jerry Vezza, a well-known Madison musician. Several years ago, Madison Kiwanis had an annual fundraiser called “all that Jazz” at Shanghai Jazz in Madison. Jerry Vezza was very kind to the club and helped by performing at the fundraiser. He also brought MHS students to the fundraiser. Because of his kindness, the Madison Kiwanis Club named a music scholarship after him. The scholarship award is given to a graduating Madison High School music student. Jerry made the scholarship presentation last year and will make it again this year on June 16 at the MHS awards ceremony held on the campus of Fairleigh Dickinson University.
Posted by Chatham-Madison Kiwanis at 6/03/2011 05:14:00 PM No comments:

President Dick Plambeck described the Chatham Memorial Day Ceremony, using plaques newly refurbished by American Legion Post 43. Also, the Kiwanis NJ District Convention will be August 19-21 at the Crowne Plaza Hotel, Somerset, NJ (we will be the host club). Dick mentioned that information on the ELIMINATE project is available on Kiwanis websites.  Gary Arnesen reported that the Chatham Ogden St. clean-up went well and six bags were filled with litter, including spikes discarded by railroad workers. He thanked club members for their hard work and announced that the next clean-up will be in July. Jerry Cunningham reported that the Veterans flag-placement at Fairmount Cemetery was well-attended and he thanked the members for their work. Nancy Holt reported that the she received a thank-you letter from the Interfaith Food Pantry with photographs of their new building under construction. Dick noted that the Chatham Community Garden will harvest and deliver produce to the Food Pantry on a weekly basis during the summer. Tom Mullin passed around a sign-up sheet for the Fishawack pulled-pork booth.
Posted by Chatham-Madison Kiwanis at 6/03/2011 05:04:00 PM No comments: