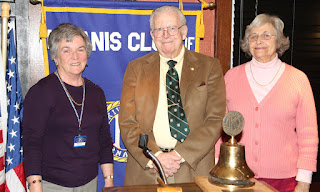 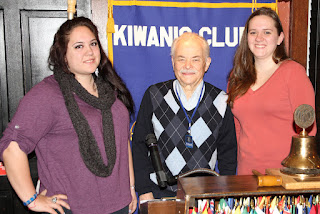 The reinstate Drew Circle K is making plans for the coming year.  Victoria is the only continuing member who has “stuck it out” during the process of reinstating the club. She and Bob Stannard (in photo), working with the Drew faculty advisor and university administrators, have restructured Circle K and are ready to move on. Membership is now at 19 people. Circle K is planning a “Dance to ELIMINATE” event in March, a “Pizza Dinner”, a “Walk to ELIMINATE”, and making “Hug-a-Bears” for children. Election of club officers will take place the end of March and they will send nine representatives to the NJ District Circle K Convention in March. Victoria thanked Drew University for paying the fees for the club to attend the convention. Victoria also thanked Chatham-Madison Kiwanis for helping Drew Circle-K back on their feet. Members of Kiwanis loudly applauded the speakers and the fine work of the Circle K.
Posted by Chatham-Madison Kiwanis at 2/24/2012 09:42:00 AM No comments:

Announcements: Mary Anne Maloney gave an update on NJ District Mid-Winter Conference held at the Ocean Place Resort in Long Branch. Our club sent five representatives who covered the four excellent workshops. She reminded everyone about the March 28 Fish and Chips dinner. Parsippany Kiwanis is having another wine-tasting on March 22 which includes a dinner. ECLC sent us a Valentine’s Day card (which displayed the new butterfly logo for ECLC).  Mary Anne passed it around for all to see. Pat Davidson announced that St. Paul’s Episcopal Church in Chatham will be holding a Shrove Tuesday Pancake Supper. Proceeds will go to Project ELIMINATE.
Posted by Chatham-Madison Kiwanis at 2/24/2012 09:32:00 AM No comments: 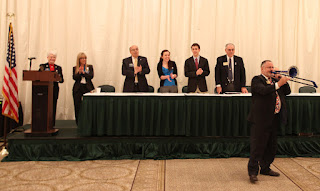 NJ District Kiwanis International held their Mid-Winter Conference yesterday in Long Branch on the Jersey Shore. It was an awesome event with inspiring workshops. Everyone got in the mood when International Trustee Stewart Ross played “When the Saints Come Marching In” on his trombone.  Stewart also led a workshop on “Moving your Club from Good to Great”. 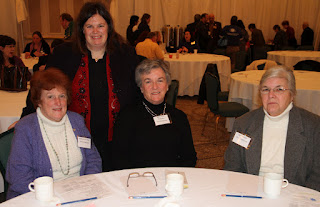 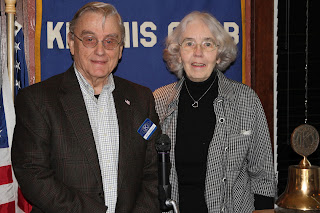 Bill Williams spoke on “The Election, the Media, Polling, & MONEY” at Kiwanis. Bill last made a presentation to Chatham Kiwanis at the William Pitt restaurant over 35 years ago. He thought another good title for this program would be “A modern American Industry”, because that is what our elections are turning into.

Bill  is Professor of Mathematics and Statistics at the City University of New York – Hunter College.  In the above photo he is shown with his wife Marion at the Chatham-Madison Kiwanis 2/7/2012 luncheon meeting.

Bill started by reminding the audience of the dramatic errors made by past political polls, e.g. the NY Times headlining Gov. Dewey winning the 1948 presidential election. Polling companies began about 1920 and there were no major errors made until about 1936, when Langdon was expected to beat Roosevelt.  At that time, there were only three or four polling companies and methods were not yet perfected – data collection was a new idea. Today, there are hundreds of polling companies in business, academia and media-politics. Some are legit, others are questionable. Bill described how “numerical propaganda” leads people to act on worthless data. He also explained the difference between precision and accuracy.

In Bill’s early career, he worked on pre-data. It is important to carefully plan how data is collected. Outcome of statistical analysis is influenced by how the data is gathered in the first place.

The Republican primary campaign has had sharp swings as news (including polls) is covered by the media and candidates respond with ads. The Democrats are sticking with President Obama, who presently has a low approval rating. He is also thought to have an enormous (Billion Dollar) SuperPAC war chest. Republicans have much less money.

The audience applauded Bill’s entertaining and thought-provoking presentation. Click here for more information.
Posted by Chatham-Madison Kiwanis at 2/09/2012 09:38:00 AM No comments:

Mary Anne announced the Valentine’s Day Luncheon next week. She also reminded everyone about the Mid-Winter Conference and mentioned that she, Marc, Betty Anne, AD, Ron and Bert plan to represent the club. There will be a 50-50 raffle. Morristown hospital asked for volunteers to work with children in the pediatric unit - a flyer was circulated. MHS Key Club is volunteering for a Bocce Ball tournament and they need donated items for the “goody bag”. Bob Stannard was acknowledged for his work in reactivating the Drew Circle K Club. A Kiwanis International Webinar will cover “Fundraising”. Karen  gave an update on planning for the Awards Reception. Marc encouraged members to consider running for NJ District officer positions. Mary Anne has application forms. Marge sent around a "get-well-soon" card for John, who is recuperating at home after a short stay at the hospital.
Posted by Chatham-Madison Kiwanis at 2/09/2012 09:30:00 AM No comments:

Jerry Cunningham led a fundraiser to collect contributions for the Kiwanis Eliminate Project. At the January 31 breakfast meeting, he took the microphone to each table where members put a few dollars in Jerry’s hat and said a few words. One hundred and forty dollars was collected for the Eliminate Project. See photos from the meeting below. 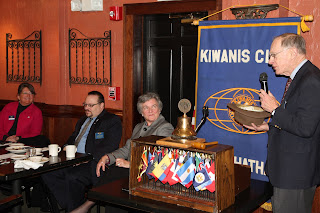 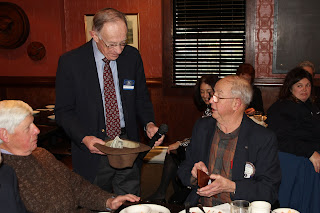 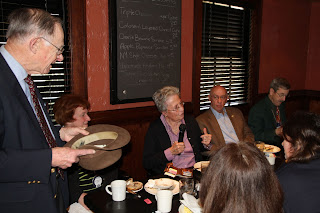 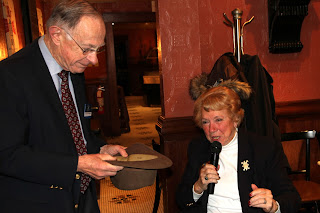 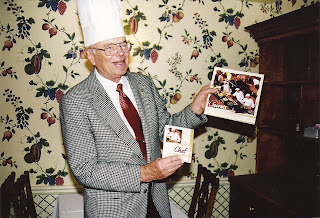 Chatham-Madison Kiwanis members attended the January 31, 2012 memorial service honoring the life of our dear member Clyde Zukswert. One of his Kiwanis fund-raising projects was selling “Entertainment Books” (you know, those books filled with discount coupons). In the above photo, Clyde put on a chef’s hat to tell members about a great restaurant whose coupon was included in the book.
Posted by Chatham-Madison Kiwanis at 2/01/2012 10:08:00 AM No comments: