The February 24 "Wine Tasting - Wines from Around the World" was a success.  Funds from the event will be given to ECLC of NJ and Kiwanis Scholarships. Kiwanis thanks all the people who came and contributed items for the event. Here are a few photos taken at the event. 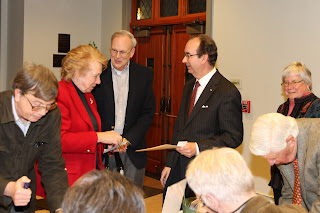 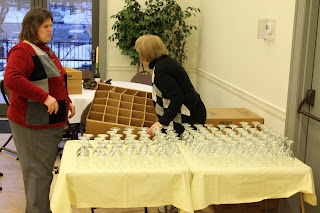 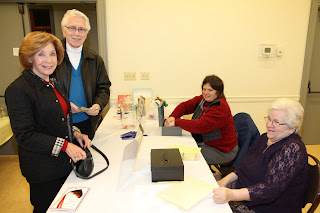 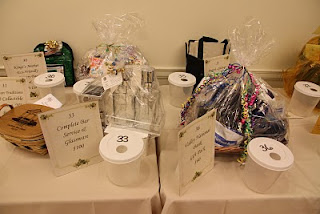 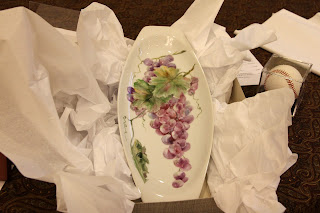 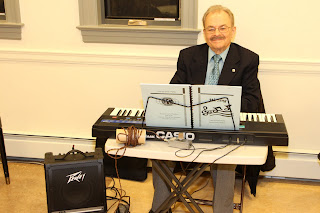 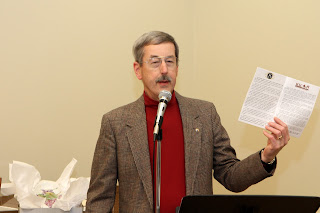 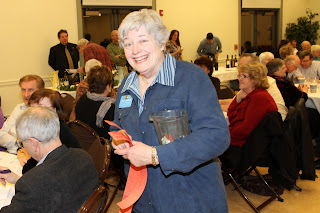 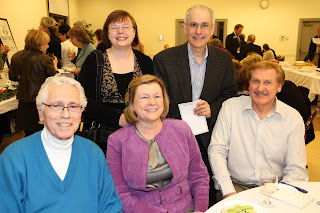 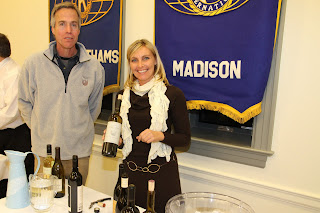 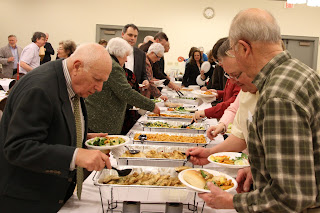 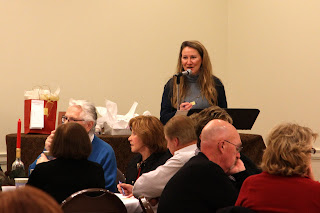 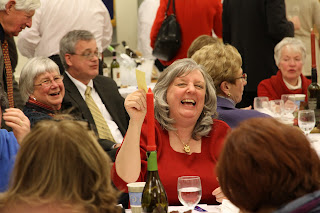 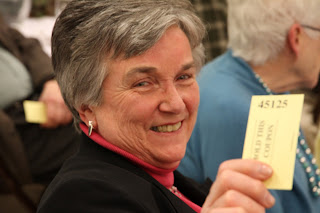 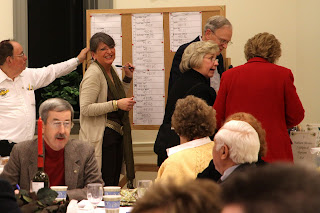 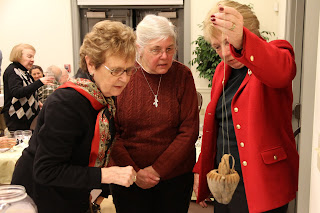 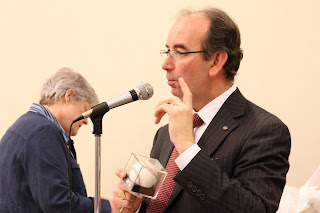 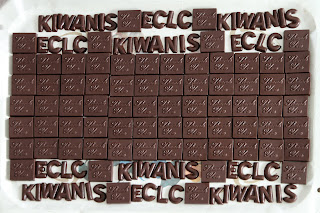 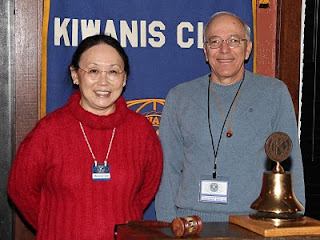 Betty Anne reported that the CHS Key Club will be holding evening meetings for the rest of the school year. With regard to the Wine-Tasting event, Rich asked all members to show up on Thursday. Mary Ann reported that over 100 tickets have been sold. Nancy reported that Chatham Bakery is donating desert. Alan passed around the work assignments for the Fish and Chips Dinner. Members were asked to indicate “OK” if they agreed with the assignment. March 15 is the deadline for members to run for District offices.
Posted by Chatham-Madison Kiwanis at 2/27/2011 05:41:00 AM No comments:

Diane Mann, President and CEO of the Madison Area YMCA, spoke on February 15 about the mission, values and goals of our local YMCA.

Diane Mann graciously thanked the Kiwanis club for the opportunity to speak about the YMCA.  She shared the YMCA mission statement and values. As a 501(c)3 organization, the Y raises money and uses it for good causes.

The YMCA finances are in good shape (no debt), but they need to continue encouraging people to contribute money to the organization. She wants to encourage partnerships with other organizations of like mind to strengthen the community and support children and others in need.

They provide health and exercise facilities; but, the Y is more than that – they are a support facility. They provide services at two locations: the Kings Road Family Center (with a complete fitness center) and the F. M. Kirby Children’s Center on East Street. The former school can serve up to 350 children (infant through Kindergarten) in accredited classes.

The Y has a $9.2 Million operating budget, about 500 employees when fully staffed in the summer and about 9,000 members who use the fitness center. The Y raises $250,000 to $300,000 in contributions each year from several hundred donors. The Y is predominant in the community, highly valued by the community and has a strong Board of Directors.

They are dealing with the “post-2008” economy. More support has been needed and given to members hit hard by the recession. While the Y has been successful in keeping members, there has also been a reduction in revenue.

The Y is building their contributions campaign for the coming year. Volunteers are needed to go out in the community, tell people about wonderful YMCA experiences, and grow the number of donors. The campaign will raise awareness of the Y mission and raise money as well.

The Y is also doing a program cost study to find the most efficient way to meet their mission. They are looking at everything they do to find savings. Data is being collected and analyzed. Also, community focus groups are being used to determine how to meet the highest priority needs at the least cost.

Kiwanis offered to be one of the focus groups providing input and assistance to the YMCA.

The Y needs a larger swimming pool and is analyzing the situation to determine how this need can be met. To learn more, please visit the YMCA website.
Posted by Chatham-Madison Kiwanis at 2/16/2011 04:56:00 PM No comments:

Betty Anne announced that the CHS Key Club will meet at 7:30 PM on 2/15/11 in the cafeteria.  Rich reported on the Wine-Tasting, saying that Karen still needs a couple of volunteers to help with the tricky trays. He passed a sign-up sheet around. Dick reminded members that the February Board Meeting starts after the program. Alan handed out Fish and Chips tickets to members. Gary discussed the Chatham Borough spring clean-up, which will be scheduled for April 20.
Posted by Chatham-Madison Kiwanis at 2/16/2011 04:38:00 PM No comments:

The attendance was very good at the Kiwanis Valentine Luncheon. Members introduced their guests and everyone sang love songs.
﻿
﻿Club President Dick Plambeck passed around the District 10 award given to our club for growth. He asked all members to keep working at growing our club. Karen Swartz announced that the CHS and MHS Key Clubs will provide the program for the Kiwanis March 22 breakfast meeting. There is a CHS Key Club meeting next Tuesday February 15 in the cafeteria at 7:30 pm. Future CHS Key Club meetings will be evening meetings. Nancy said Wine-Tasting ticket sales are going well. Alan Robertson handed out Fish and Chips Tickets to members so that they can sell them. He said placemat ads are going well.  Dick reminded members that the Board of Directors meeting will be held after the breakfast meeting at Charlie Brown’s on February 15. Dick and all the members thanked Valerie Olpp for organizing the Valentine’s luncheon meeting at Charlie Brown’s.

Rich and Debbie Behling went on a trip to Africa recently. Rich showed many of his photos and, with Debbie, described their interesting experiences.
﻿
﻿They traveled first to Johannesburg, SA and from there by small plane to Victoria Falls. From there they flew to four camps in four wildlife preserves. Tourists slept in eight huts with canvas walls. Open bathrooms were behind the tents. There was a common dining area with at least one wall and a bar where there was a happy-hour every evening. Temperature reached 104 Fahrenheit most days.

Travel was by small single engine planes but some travel was by boat. Debbie told of a native making flower necklaces – “he hoped the romance would last as long as the flowers.” They traveled on “game drives” in Jeeps (safari vehicles) which carried three rows of people.
From their tent Debbie and Rich could watch animals at a water hole. Animals arrived by kind - elephants, Cape buffalo, etc.
They saw many species of animals. They photographed animals: antelope, hyenas, baboons, wart hogs, monkeys, crocodiles, monitor lizards, a bat, painted red frogs, ostriches with babies, lions, termites and more. The trip was taken in the dry season and had more animals. In the wet season, there would be more birds. Travelers frequently got very close to lions by stayed quietly in the open jeep. They saw two lions attach and kill a Cape buffalo which had foolishly strayed from the herd.
Victoria Falls, twice as big as Niagara Falls, had low water because it was the dry season. They walked on a trail to view the falls and also took a helicopter ride to see the falls. One of their photos showed a beautiful rainbow made by the mist from the falls.
They went for an “up-close-and-personal” walk with 6-18 month old lions (a sort of “tourist trap”). Debbie grabbed a lion by the tail and let it drag her along. A photographer took the obligatory group picture of the 13 travelers (3 were single, the rest couples).
During the cultural day, they visited local people living in a village and learned their customs. Natives live in huts with walls made from termite mound “dung” which hardens like concrete. There was a girl playing” jacks” using natural objects like seeds for the jacks. Photos showed how natives carry babies and other items. There was a tour of the school, which is sponsored by Grand Circle Foundation. Multiple bathrooms by grade and sex are provided and each class grade maintains their own bathroom. Students are taught English. They used a beach ball globe to study geography.
Villagers eat lunch in a common hut with men sitting on seats and women sitting on the floor. Women prepare and serve meals ordered by men. Debbie was selected by the Chief to help the native women so she cooked and served Rich, kneeling as she presented him the food he asked for.
Because Kiwanis has the ELIMINATE project, Debbie asked a village nurse whether they vaccinate women for tetanus. She answered that they do vaccinate pregnant women if they can travel to the clinic.
The trip was managed by Overseas Adventure Tours, which is part of Grand Circle Tours. Click here to learn more.
Posted by Chatham-Madison Kiwanis at 2/07/2011 08:24:00 AM No comments:

Argyle Restaurant in Kearny is having the Robert Burns “interclub” February 2. Two members will attend.  Mary Anne Maloney reported that quite a few Wine-Tasting tickets have been sold.  Nancy Boucher announced that more tricky tray auction items are needed. Dick Plambeck reported on the NJ District Kiwanis Mid-Winter Conference held January 29, where the ELIMINATE project was discussed. Chatham-Madison Kiwanis won an award for growth in District 10. He also announced that the Valentine’s Luncheon will be held next week and asked members to alert Valerie via email regarding plans to attend.
Posted by Chatham-Madison Kiwanis at 2/07/2011 08:14:00 AM No comments: