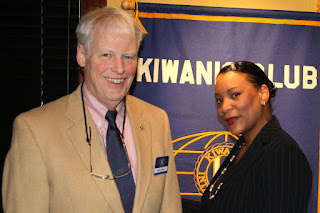 Newark Municipal Court Judge Roslyn Holmes Grant was introduced by John Eyre, President-Elect of the Chatham-Madison Kiwanis Club. She is a full time judge, hearing approximately 1,000 cases per week. Judge Grant led the audience in a brief training program which taught everyone the foundations of our justice system. The program was loads of fun and very educational. She held a question and answer session at the end. The audience loudly applauded the excellent presentation.
Posted by Chatham-Madison Kiwanis at 2/22/2013 10:43:00 AM No comments: 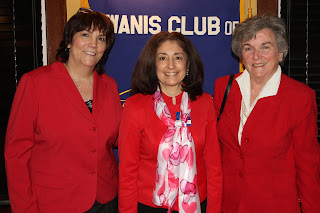 Valerie Olpp (center in photo) organized the February 12 Kiwanis Valentine’s Day Luncheon held at Charlie Brown’s restaurant in Chatham Twp. On the left is Christie Sedita, new Kiwanis member and Branch Manager of Peapack Gladstone Bank in Chatham. On the right is Mary Anne Maloney, Past President of Kiwanis. 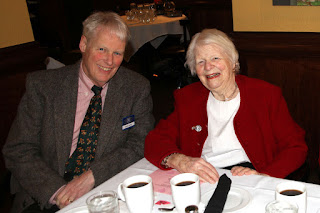 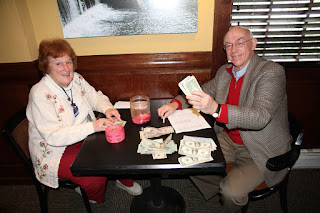 Betty Anne Keat and Doug Bryant check everyone in at the start of the Luncheon. 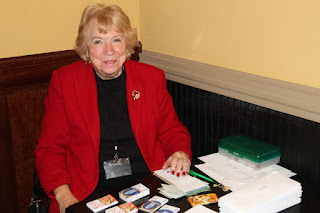 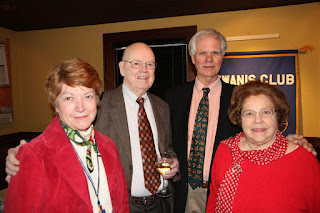 The luncheon party was enjoyed by everyone and they applauded Valerie and Charlie Brown’s manager Alan Nekoukar for creating the wonderful event.
Posted by Chatham-Madison Kiwanis at 2/15/2013 09:44:00 PM No comments: 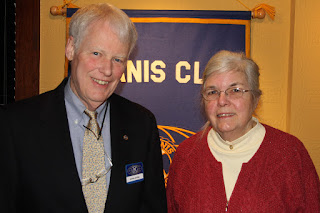 John Eyre introduced Bert Whalin (right in photo) at the January 29 Kiwanis meeting. She and Ron Whalin gave an educational and entertaining talk on the twelve presidential libraries. They have visited and toured all twelve presidential museums and libraries: Hoover, Roosevelt, Truman, Eisenhower, Kennedy, Johnson, Nixon, Ford, Carter, Reagan, H. W. Bush and Clinton. The George W. Bush library is under construction. The new museum located at Southern Methodist University in Dallas will be opened to visitors in May.

Presidential libraries are operated by the National Archives and Records Administration (NARA).

The Presidential libraries were illustrated using photographs and the National Archives websites. One of the largest and most visited is the Ronald Reagan library in Simi Valley, CA. The following photo shows the Air Force One plane which Reagan used while in office. This airplane is displayed in a walk-through exhibit. 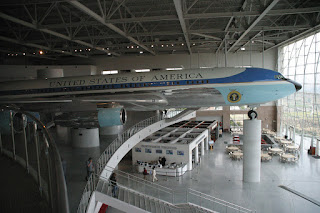 The audience asked questions and contributed interesting comments during and after the presentation.

Nancy Boucher reported on the recent Kiwanis NJ District Mid-winter conference. There were very good training sessions. John Eyre passed around a sign-up sheet for the Fish and Chips Dinner.
Posted by Chatham-Madison Kiwanis at 2/03/2013 09:45:00 AM No comments: