Gary Arnesen thanked everyone for selling Pasta Dinner tickets and Mary Anne thanked Nancy for tracking the ticket sales on her laptop computer. Stu Shippey announced that he has received all the nuts for our Holiday Nut Sale. He thanked members for sending in their orders and urged them to get more sales. He needs another volunteer for Kings Supermarket sales. He will sell nuts at the Pasta Dinner. Mary Anne reminded members about the Parsippany Kiwanis Grand Tasting event on October 27. We will have an “Interclub” of members attending. Nancy Boucher reported that the head of Kiwanis International will attend on behalf of the ELIMINATE project. Betty Anne announced the Middle School Builders Club meeting on Tuesday and their Entertainment Book Sale. Also, Karen announced the CHS Key Club on Wednesday. There will be a MHS Key Club meeting on Thursday. She also announced that member John Hadamuscin’s mother (Clara Henry) passed away and the memorial service will be held at the Chatham United Methodist Church on Saturday at 11:00 AM. A reception will follow. Mary Anne mentioned that the Chatham Courier had an article about CHS Key Club collecting baby items to support a project led by Dr. Hurley. Joan May asked members to attend the Santa Bell workshop next week (see photo). She also asked members to review the Member Manual which was recently emailed out. 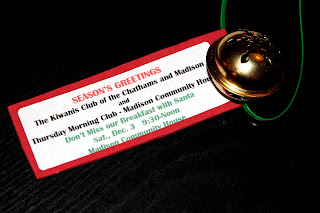