Sharon Johnson, Co-Chair of the Pasta Dinner reported that the club did very well at the Pasta Dinner. She thanked everyone for all the hard work. The final results are not yet tabulated. Nancy Boucher announced that ten members have not yet paid. An email will be sent out reminding all members to send her any outstanding payments. Karen Shippey reported on the holiday nut sales. We are half way to the break-even point in the project. She asked members to keep the orders and checks coming in. Club President Mary Anne Maloney attended the recent CHS Key Club meeting and reported that we had an “Interclub” and student participation is huge. She also attended the CMS Builders Club meeting. She reminded members about the Parsippany Kiwanis wine tasting in Mountain Lakes this coming Thursday. An email went out asking members to help pour wine. Also, Cape May Kiwanis is having an ELIMINATE walk to raise funds on November 12. Next year, a cruise to Bermuda is planned for May 27 to raise funds for the ELIMINATE project. Karen Swartz announced that she turned over a 16 gallon container and five grocery bags full of travel toiletries donated by members and others to the Eric Johnson House. Laura Silvius, editor of Chatham Patch posted a terrific article – click here. 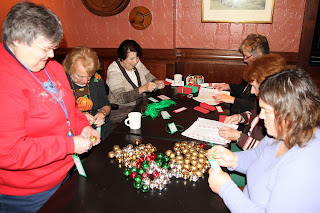 Joan May announced that immediately after the meeting, there will be a workshop to assemble Christmas Bell favors to be handed out at the Madison Christmas Parade. The photo shows volunteers hard at work.
Posted by Chatham-Madison Kiwanis at 10/26/2011 02:29:00 PM