July 26 Program: Clyde Zukswert spoke on his “Prescription for a Meaningful Life”

Kiwanis Club member Clyde Zukswert gave us his “Prescription for a Meaningful Life”.  He was inspired by Edward McVaney of Denver, who wrote to his grandchildren about choices that will affect their happiness and success.

Clyde’s Prescription began with “A Positive Attitude”, followed by “The Importance of Honesty”.  The second one is illustrated by the many people in high positions who have lied when accused of wrongdoing, only to be exposed when the truth came out.  This has led to the resignations of our President, some Congressmen, and the head of a nationally distributed newspaper.  The next on Clyde’s list is “Respect (and Concern) for Others”.  He cited Princess Diana as an example of this in her public life.  Similar to this is the importance of “Doing for Others”.  An example of this in his life is the work of the volunteer fire fighter.  He also mentioned his admiration for the work of Jimmy Carter with Habitat for Humanity.

Clyde’s list continued with his advice to consider your job as a “Career for Life”, and you will find fulfillment.  This will be true, even when you change careers, as he did.  Next is “Keep Active for Life”, for which he cited the story of Joe Foss, a Marine pilot who later became Governor of South Dakota.  With “The Importance of Reading”, he told the story of his dad, who had to leave school early to help his family.  However, he kept up his education by reading his brother’s textbooks. He later returned to school and then earned a CPA.  The last prescription was to do a “Random Act of Kindness” every day.  For Clyde, this has brought hope, happiness, meaning and fulfillment to a life well lived.

After waiting for the applause to subside, President-Elect Mary Anne Maloney thanked Clyde for sharing his Prescription with our members, and gave him a Kiwanis pen as a token of our gratitude. 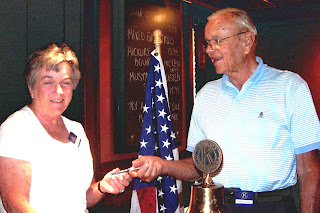