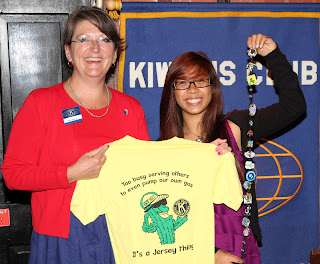 Celina Baquiran, introduced by Key Club advisor Karen Swartz, is the NJ District Division 14 Lieutenant Governor. She attended the 2011 Key Club National Convention held in Phoenix, AZ. The photo shows Karen holding the NJ District T-Shirt and Celina is holding the badges she collected from other International and National Key Club Districts. She thanked the club for helping send her to the convention, where she learned much more about the workings of Key Club.

Before the convention officially started, the Celina had a chance to tour northern Arizona places like the Grand Canyon, Flagstaff and Sedona.  Celina reported on preliminary bus tour followed by the daily events at the convention.

Dressed for a cool airplane and airport, it was a shock for her to walk into 110+ temperatures in Phoenix. Following a 3-hour bus ride to the Grand Canyon, she and the others went to view the beautiful sunset. She left the hotel the next morning at 4:30 AM to go see the sunrise and found that the temperature was a cold 45 at the Grand Canyon during sunrise. From there the bus went to Flagstaff, Sedona and then to the official hotel in Phoenix.

There was opportunity to meet other Key Club members during free time in the pool and while walking to the Mall. She was particularly impressed by the California-Nevada-Hawaii District.  Members of that district are spirited, wear black and yellow outfits and have a special Cheer. She passed around photos taken at the convention.

The “Meet and Greet” session was held on Wednesday. Everyone wore their District T-shirts and pins. Pins were exchanged. Fund-raisers and other activities were on the schedule. An ice-breaker was a huge “Twister” mat. At the opening session, Amy Meisner of the NJ District sang the National Anthem. Nominations were made for International President, Vice President and Trustees. Caucusing was held after lunch. Jared Greene from Tenafly, NJ was running for International Trustee and he made it past the first round. Celina attended the ELIMINATE workshop and the “Keys to Meaningful Service and Great Service Projects” workshop. She also participated in the candle-lit “ELIMINATE Charity-Walk”. The first day ended with a dance.

On the second day, there were more workshops and a “Service Fair”, where Districts could do things. NJ had a booth where they raised $80 for the ELIMINATE project.  Then there was more caucusing – NJ delegates lobbied for election of Jared Greene. Next was the recognition session. NJ District won many awards (click here to go the NJ website and read about the awards).

The next morning there were more workshops and Celina attended the Lieutenant Governor workshop. She also attended a workshop presented by NJ District on “How to Hold a Benefit Concert”. It was based on last year’s successful chain of “Generosity Rocks” concerts. The workshop drew a huge attendance with people sitting on the floor when all chairs were filled.

Next on the schedule was the “House of Delegates” meeting followed by election of officers and voting on amendments. Jared Greene was elected as one of the eleven Trustees. The 2012 convention will be held in Orlando, FL. 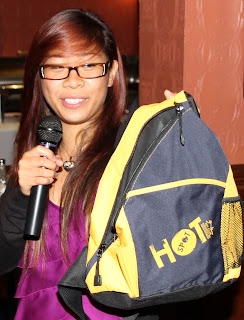 Celina said that she will try to get members of Division 14 more involved in the activities of Key Club. Members of Kiwanis loudly applauded the fine presentation made by Celina.
Posted by Chatham-Madison Kiwanis at 8/10/2011 09:17:00 PM