Karen Swartz introduced JoAnne Babbitt who spoke about the John Taylor Babbitt Foundation. John was taken from his family and community in 2006 when he suffered a Sudden Cardiac Arrest while playing basketball. His family directed its grief toward positive improvements to help others avoid having such a tragic loss. The family started the 501-c3 Foundation to prevent sudden cardiac death through increasing awareness, teaching CPR/AED and installing Defibrillation Devices in public places.

Sudden Cardiac Arrest (SCA) is the leading cause of death in the U.S., killing more than 295,000 people every year. Only 6 percent of victims survive and survival rates decline by 7-10 percent for every minute defibrillation is delayed. Sudden Cardiac Arrest is not the same as a heart attack (similar to a plumbing issue). SCA is more like an electrical problem in the heart – the heart malfunctions. Cause is often genetic and usually shows up after puberty.

Many deaths can be prevented by fast action and treatment. Automated External Defibrillators (AED’s) and CPR are most effective at restarting the heart when used within the first few minutes of collapse. Survival rates have been known to increase from 6-7 % to 50-70 % in certain settings (for example Newark Airport has lots of AED’s). The American Heart Association estimates that as many as 50,000 deaths could be prevented annually with widespread availability and use of AED’s.

Goals and Objectives of the Foundation are to install Defibrillators in schools, athletic venues and public gathering places; to establish JTB Heart Clubs in high schools and universities to raise awareness and save lives; and to support research on genetic cardiac disorders that increase risk of sudden cardiac death.

Current successes include Community AED Programs in 5 towns and 3 schools with CPR/AED training. A Good Samaritan Legislative Initiative is under way to reduce liability of untrained people in New Jersey who try to help. There have been many high school and university heart initiatives at, for example, Villanova, Chatham High School and Pingry. More initiatives are under way.

The Foundation enlisted CHS Key Club members to help man a booth at the Fishawack Festival. One of the Kiwanis members suggested that volunteers from MHS Key Club and Drew Circle K could also help support the Foundation. More CPR/AED training in high schools is being requested as part of the NJ-required health education.

The Foundation holds a “Walk with Heart” every May and has raised $40,000 to $90,000 each year. Pingry students help operate the event.

The Chathams were among the first towns to put AEDs on the playing fields. A Guide was created to propagated the AED program to other towns, like Toms River. Continuing training is needed and maintenance is needed for machines.

JoAnne is very thankful for the support for the Foundation from the local community. She suggested that everyone go to the Foundation website, http://jtbfoundation.org/index.cfm, and view the video on the front page. 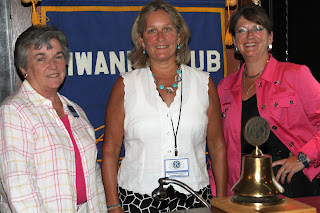