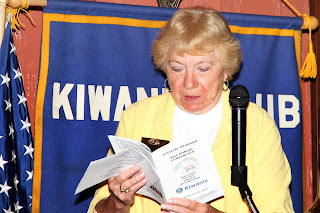 Nancy Boucher, who led host club support for the New Jersey District Kiwanis Convention, reported on the event. She acknowledged the work of Heather Alonge who printed the program, including an ad in honor of Governor Marc Litwack and Nancy. Nancy said that was very nice and a big surprise. She thanked other members of our club who helped with the convention: Nancy Holt, Betty Anne Keat, AD Dudderar and Joan May. They were the “host committee” and worked very hard. Over 250 people attended. A resolution was passed in the House of Delegates thanking Chatham-Madison Kiwanis Club for hosting the convention this year.

There were a lot of workshops on the ELIMINATE project. In the Coin Donation contest, where club members put money in a jar at each meeting, our club came in third. Kiwanis has Zeller awards for ELIMINATE donations of $1,250. Mike Mulhaul was selling Zellers and sold about a dozen, with contributors photographed the last day. There were also workshops on training officers and other topics.

AD Dudderar ran the Basket Bonanza all by herself and the project brought in $1,260. This amount was contributed to Children’s Specialized Hospital.

Nancy reported outcome of election of officers for next year. In a close vote, Joe Teti from Trenton won Governor-Elect. Rudy Fernandez from Livingston will be Treasurer. Nancy closed by passing around the program and list of memorials from the Sunday memorial service. At the service, Nancy placed a rose for Cory Fuller, who passed away last year. 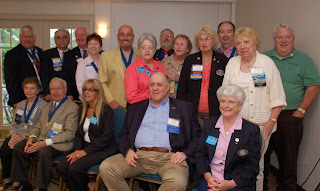