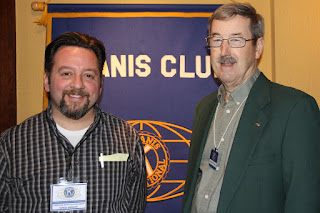 Vince DeNave (left in photo), Chatham Borough Engineer, was introduced by Dick Plambeck at the March 5 Kiwanis Meeting. Vince spoke about “Borough Infrastructure Upgrade Projects". He covered major problems caused by recent storms, which resulted in lengthy loss of power and interruption in traffic and commerce. Vince has been the Borough Engineer for a number of years and he has spoken to Kiwanis several times in the past. Vince mentioned that Bob Falzarano, Borough Administrator is now back to work after recovering from serious injuries and he is now providing leadership to our community.

Last year’s super-storm Sandy created unprecedented challenges to Chatham Borough. Hurricane Irene and the “Halloween snowfall” caused extensive problems. It could be that lengthy, two weeks or more, power outages may be the new “norm”. People wonder why we don’t put all power lines underground. Vince pointed out that it would be too costly to do that.

Local communities are unable to help their neighbors when all of them have damage due to large scale storms. Chatham needs to be self-sufficient. In recent years, Chatham installed back-up generators for water and sewer pump stations.

Chatham Emergency Management Team holds weekly meetings to make continuous improvement in readiness to withstand future disasters. They are also meeting with JCP&L, the predominant electrical utility in Chatham, to try to do things better.

The audience listened with great interest to how preparations are being made for the next storm. After a few questions and answers, everyone applauded the presentation and innovative changes being considered to make our town safer and to speed up recovery in the future.
Posted by Chatham-Madison Kiwanis at 3/08/2013 10:04:00 AM