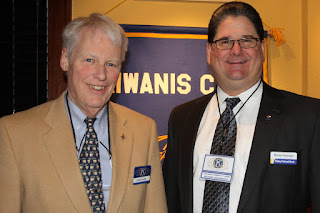 Michael moved to New Jersey from the San Francisco area of California about a year ago to lead the Chatham branch of Valley National Bank.  The branch was awarded the Chairman’s Club award as one of the top five percent branches and Michael was named one of the best rookies of the year.

Our Chamber has had a tough time over the past few years but Michael has approached his leadership role with enthusiasm and optimism. He appreciates the support by local business members, including some from Kiwanis. He is providing better connections to political leaders and to new businesses in the area. He and the Chamber will have increased participation in activities of the community.

The Chamber is working with The Alternative Press to provide improved visibility of Chatham businesses. Michael want to make sure everyone in the area is aware of the fine businesses operating in Chatham Borough and Township. More information on local business is available on the Chamber website. More “mixer” events are being held with businesses (both breakfast and evening). Networking and working together are being encouraged.