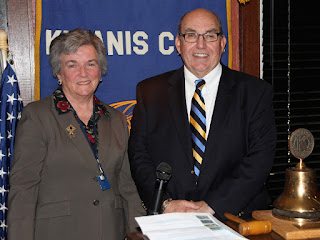 Doug Simon gave a talk to Kiwanis on "Presidential Elections and American Foreign Policy" at the March 7 luncheon meeting. He is Professor Emeritus of Political Science at Drew University.

Doug started out with two quotes: “All politics is local” and “It’s the economy, stupid”. These quotes reinforce the notion that “Foreign Affairs” do not play a significant role in American Presidential elections.  However, war influenced the outcome of some elections.

He went on to give an enlightening and entertaining talk filled with many interesting stories. His analysis of current and past election campaigns rang true. The audience heartily applauded this wonderful presentation about the history surrounding American elections.
Posted by Chatham-Madison Kiwanis at 3/11/2012 12:24:00 PM