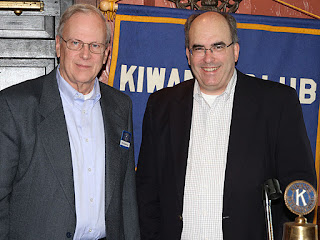 Jeffrey Kerr (R), Energy Correspondent at Thomson Reuters told Kiwanis “WHO’S GONNA MAKE OUR GASOLINE” at the 1/24/12 breakfast. Rich Behling (L) introduced Jeff, who follows the East Coast gasoline, heating oil and jet airplane fuel markets. He has 24 years of experience in the energy field, half as a journalist and half working in the industry. He lives with his wife and daughter in Madison.

Jeff gave a fascinating account of the status and trends for delivery of gasoline to the East Coast area of the USA. After giving an overview of how gasoline is produced, he covered the refineries and pipelines that deliver gasoline to our area.

Many rapid changes are underway because of economic conditions. Refiners are not making enough profit so they are closing plants on the east coast in the USA and in the Caribbean. Many people are out of work because of closings. Alternative fuel sources may not be available in time to fill demand, so the pump price of gasoline will probably rise more than usual this summer. Because local refineries are closing, gasoline must be shipped to the East Coast at considerable cost.

Jeff told about happenings in the transportation and refining of fuels. India is getting into the refining business with a very large export-only refinery north of Mumbai (Bombay). This is having a profound impact on the World market. Europeans are increasing their use of diesel fuel. Gasoline is a byproduct of diesel refining so the USA has received excess gasoline from Europe. Some of our gasoline even comes from Russia.

Huge oil storage tanks are being constructed in Cushing, OK to store oil from Canada transported via the proposed Keystone XL pipeline.

In New Jersey, we have the Linden Bayway refinery owned by ConocoPhillips and Hess refinery at Port Reading, NJ. The Sunoco Eagle Point refinery in Westville, NJ is shut down (assets may be shipped to India). At Paulsboro, NJ there are two refineries - the Nustar Asphalt Refinery and a large nearby PBF Energy refinery. The audience was surprised to learn that PBF Energy, with headquarters in Parsippany, NJ, is in the refining business (they also have a large refinery in Delaware). All the gasoline from the PBF refinery in Paulsboro, NJ goes to Lukoil gas stations. Also, Chevron has an asphalt refinery in Perth Amboy, NJ which operates seasonally.

In Pennsylvania, the ConocoPhillips Trainer, PA refinery is shut down – many workers lost their jobs. The nearby Marcus Hook, PA refinery owned by Sunoco is also shut down.

The very large St. Croix Hovensa refinery just announced that they will shut down next month. Loss of salaries and tax payments from the major employer is very hard on the US Virgin Islands economy.
USA Gulf refineries are increasing their capacity. The Colonial pipeline which carries gasoline from the Gulf to the Northeast USA will increase capacity, but not until next year. The supply of gasoline will be short in the Northeast this year.

Meanwhile, crude oil and distilled fuels from fields in the West are being transported via 100-car “unit trains” to Albany, NY and then by barges to markets in New Jersey, Pennsylvania and Delaware. It would help if the USA could build more pipelines for liquid fuels.

Jeff told many interesting and entertaining stories to the delight of the audience.  He was given a rousing round of applause at the end of the talk.
Posted by Chatham-Madison Kiwanis at 1/28/2012 09:49:00 AM