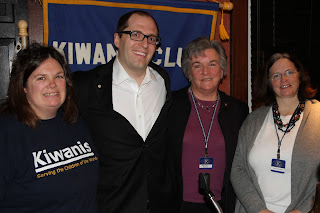 Simon Mandal was inducted into Kiwanis on January 17. His sponsor was AD Dudderer. In the above photo are (L to R) AD, Simon, President of the club Mary Anne Maloney, and Secretary Sharon Johnson.

AD introduced Simon to members. Simon is a sought after entertainer. He has performed as a magician, stand-up comic, actor, and clown. Simon has dazzled hundreds of thousands of adults & children with his lightning quick wit, disarming personality, and amazing sleight-of-hand skill. In addition to school and family shows, Simon performs for Fortune 500 Companies, including Google, Macy's, and JP Morgan.

AD put the Kiwanis pin on Simon’s lapel. Sharon and Mary Anne welcomed Simon into the club.
Posted by Chatham-Madison Kiwanis at 1/18/2012 04:40:00 PM