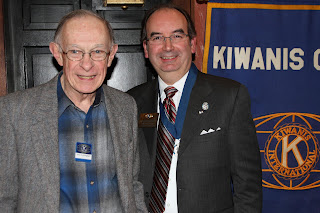 Mike Mulhaul (right), who is the Kiwanis NJ District Coordinator for the ELIMINATE Project was introduced by Jerry Cunningham (left). Mike is a Past Governor of the NJ District and an active member of the Greater Parsippany Club.

After introducing the ELIMINATE Project, Mike showed an excellent video explaining ELIMINATE. Click here to view the video on the web.

The last Kiwanis World-Wide Project was the Iodine Deficiency Disorders project, which raised over $80,000,000 to support UNICEF in eliminating this terrible illness.

Selection of the next International project was made by a consortium of Kiwanis members who participated in choosing the best project based on ideas from many members. The choice of the ELIMINATE Project was formally announced at last year’s Kiwanis International Annual Convention.

There are 38 countries around the world with serious Tetanus problems. UNICEF has been working on this since 1999. The MNT infection happens during the birthing process, which is often poorly controlled and very unsanitary. Both mother and child die horrible, painful deaths. The cost of prevention is minimal - only $1.80 for three tetanus shots, given at 8-week intervals. Treatment needs to be repeated every 10 years.

Mike asked the audience to seriously “take an interest” individually and as a club. The benefits of correcting the Maternal/Neonatal Tetanus (MNT) problem greatly exceed the cost and effort. Kiwanis is raising $110,000,000 over a period of four years. In 2015 when Kiwanis is 100 years old, the ELIMINATE project should be completed. In New Jersey, Kiwanis Family Clubs (including sponsored youth) need to raise $1,066,444.00 over the next four years. New Jersey has already contributed over $88,000.

Recognition is given, via the Zeller Award, for contributions of $1,250. This amount saves 695 lives. Walter Zeller is known for his contribution to the fledgling Kiwanis Foundation in the 1940’s. Individual Kiwanis Clubs can also qualify for recognition as “model clubs” ($75 per member during the 4-year period). Clubs can also qualify for the $100,000 Club Award. There are also other awards.

Mike passed around brochures describing what you and your club can do, how people can contribute money, and campaign recognition. To learn more about ELIMINATE, go to website www.TheEliminateProject.org. Click here to learn how to make a donation to ELIMINATE