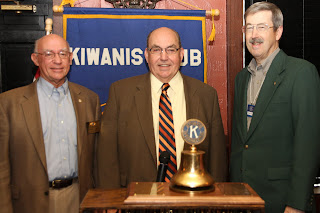 Doug Bryant (left) welcomed and introduced speaker Doug Simon (center), Political Science Professor Emeritus from Drew University. Club President Dick Plambeck (right) also welcomed the speaker. Professor Simon is a good friend of the Kiwanis Club and has spoken to the club many times, sharing his expertise on international relations and foreign policy. As in the past, there are a lot of international issues today. Doug Simon shared his analysis and thoughts on current foreign policy.

He did an assessment of the Obama administration - where it has been and where it is going. He was both supportive and critical of this administration in trying to assess where we are going. Upon entering office, Obama was challenged by critical issues: an economy in free fall, the worst financial crisis since the Great Depression, wars in Afghanistan and Iraq and worsening conditions in Pakistan.

The President put together a highly qualified, main stream, centrist foreign policy and national security team. New visions and directions in foreign policy came from Obama himself. However, progress has been slow. Obama is not a soaring visionary – he is a thoughtful problem solver. He has had some serious reality checks on how the international system works, learning from situations he has been forced to confront.

Early on, Obama quickly set a tone for his new administration by, for example, granting a Presidential interview with radio station Al Arabyia. He also re-conceptualized American foreign policy, renewed emphasis on diplomacy and reconstituted the war on terrorism. He placed more emphasis on relations with China and Russia, increased pressure on Iran and continued attention to the Israel-Palestine problem.

Doug devoted his remaining time to analysis of Iraq, Afghanistan and Pakistan; recent events in North Africa and the Middle East; as well as a few comments on our relationship with Russia and China. Events are still unfolding and we are not sure where this will all end up. Pakistan is a very serious problem, perhaps the most dangerous country in the world. Yemen is becoming a significant problem.

The essence of Obama’s foreign policy and what might be in store: he has worked hard to change America’s image in foreign countries, his choices for his foreign policy team were very good, he has placed renewed interest on personal diplomacy, and he experienced a giant reality check on his ability to accomplish objectives. Stepped up operations against Al-Qaeda have been successful.

After a brief Q&A, the audience gave Doug an enthusiastic round of applause for his informative and entertaining talk.
Posted by Chatham-Madison Kiwanis at 4/08/2011 05:21:00 AM