From train whistle to doorbell: The story of Sears kit homes 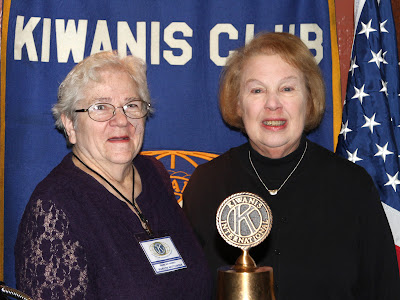 Marilyn Wittlinger presented an entertaining and informative illustrated talk on Sears kit homes.  The PowerPoint show given at the Kiwanis October 19th Charlie Brown’s breakfast meeting was enjoyed by a packed house. The photo above shows Marilyn on the left with her friend Debbie Behling. She started her research into Sears homes in 2004 while doing a report for her Vernacular Architecture class at . She was given the Drew certificate in Historic Preservation in 2005. Later that year she set up a tour of five nearby Sears homes for a group of visiting professors from Virginia when Drew held a special one-day class on kit homes. Marilyn and her husband Hal found twelve Sears homes in towns near Chatham, NJ.
Downers Grove, IL and Hopewell, VA have very large numbers of Sears homes, although kit homes are also found in many other places. Early in the 20th century, kits of parts to build these homes were shipped by railroad so homes are found in towns along railroad lines. Sears had a good reputation and over 100,000 “pattern” homes were purchased from a 146-page catalog. Long after construction, many were expanded and altered. Identification is difficult (Sears records are very incomplete) and only about 6,000 have been publicly identified. More recently, people have discovered the historical significance of these homes, which were once regarded as low cost bungalows.


Sears homes were sold and built between 1908 and 1940. Other companies also sold mail-order homes. Sears opened 48 sales offices devoted to homes and the first was opened in Akron, OH in 1919. Plants produced and shipped the homes from Cairo, IL and Port Newark, NJ. Sears even provided mortgages. Kit prices ranged from $191 to $5,140. Number of rooms could be from two to ten. There were many styles and Sears would customize them for the customer. Options like screen windows could be added. Builders who purchased and assembled the kits for customers saved about 40 percent in labor cost. Kits were shipped with drawings and specifications and even paint colors were recommended.
﻿﻿﻿﻿﻿ ﻿
Hundreds of home photos were shown in the presentation, including a large, nearby “Alhambra”. These homes were built in prosperous times when everyone wanted a home of their own. They were reasonable, functional, high quality and popular – modern homes for their time. Marilyn asked that she be told the location of houses that could be Sears Kit homes. To learn more, she recommended reading the book “Houses by Mail: A Guide to Houses from Sears Roebuck and Company” by Katherine Cole Stevenson and H. Ward Jandl.
Posted by Chatham-Madison Kiwanis at 10/24/2010 08:13:00 PM