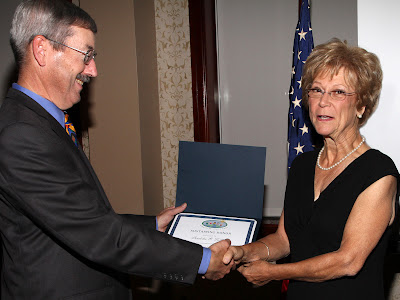 On Sunday, October 17, 2010 our dear friend and Past President of Chatham-Madison Kiwanis passed away.  This photo shows her receiving an award from Dick Plambeck at the club's 80th Anniversary celebration on September 22, 2010. Arrangements for viewing and service are available on the Bradley website.  Club President Dick Plambeck provided a very nice tribute to Cory:

Cory Fuller - a life of service to Chatham

Cory loved Chatham and was a life-long resident here. Among other things, she Co-chaired the Fishawack Festival before she was on Council and Chaired the Streetscape Committee after being on Council. She was thrilled to throw the switch when we completed the new lighting along Main Street. She served on the Planning Board and the Historic Preservation Commission and was outspoken at keeping the best features of Chatham intact while modernizing our infrastructure.

Cory was never afraid to speak her mind, and offered her own humanitarian perspective when we had to make tough decisions on budgets and funding. She loved working with the employees of the Public Works Department and regularly participated in and won the women’s heavy equipment driving contests amongst the neighboring towns. She also served on committees for the Morris County League of Municipalities and the New Jersey League of Municipalities and on the Executive Board of Morris Tomorrow. She will be sorely missed.