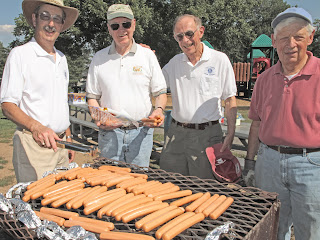 The annual Library of the Chathams Summer Reading Program Kiwanis picnic was held on August 19, 2010 in hot, sunny summer weather. The picnic, held in Memorial Park behind the library, was funded and served by the Kiwanis Club of the Chathams. Kiwanis picnic organizer Tom Mullin reported that over 200 hot dogs were served. He also reported that over twenty Kiwanis members and spouses were on hand to grill and serve hot dogs, chips, fruit juice and ice cream.  Photo shows Dick Plamback, Dick Ligertwood, Jerry Cunningham and Monty Montague barbequing hot dogs.

“Make A Splash! Read!” was the theme for the Summer Reading Club at Library of the Chathams this year. The program ran from June 28 to August 19 and was open to all children living or attending school in the Chathams. Children’s Librarian Laura Weinbrom announced at the picnic that 121 student volunteers, with backup from the library staff, listened to book reports made by participating children. Children who read and reported on enough books were invited to the Kiwanis picnic. Weinbrom said that 549 children read and reported on 8004 books. Volunteers who listened to reports contributed 1171 hours with 22 volunteers giving over 20 hours. 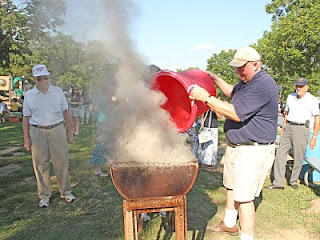 Photo shows Kiwanis project chairman Tom Mullin putting out the charcoal fire using the left-over ice-water as Mal Kitson and Clyde Zukswert look on.
Posted by Chatham-Madison Kiwanis at 8/22/2010 11:52:00 AM