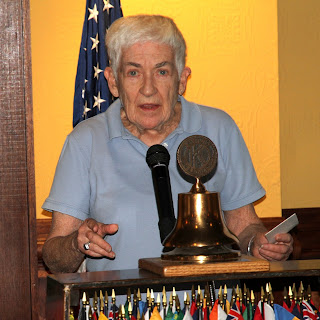 Kiwanian Joan Thuebel gave a very interesting and educational talk about her trip to Churchill, Canada to study Polar Bears as part of Earthwatch. She started with an overview of Polar Bears. Joan then described the activities she carried out as part of the Earthwatch project.

Because global warming is reducing ice formation, the bears are have a difficult time finding enough food. The bears mate in April and May, but the pregnancy does not start until after the bear eats enough food to produce the required amount of blubber. If the female bear has enough blubber in October, she we will be able to give birth to cubs.

The study observed play-fighting among male bears. Also studied was the effect of humans on the bears. The bears were photographed and their behavior was documented.
Joan showed excellent slides of Polar Bears and their habitat. The members of the audience enthusiastically applauded this entertaining and educational presentation.