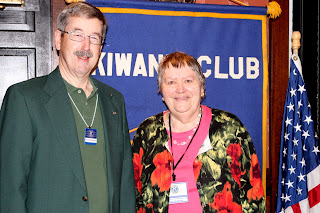 Ella Filippone, Executive Director of the Passaic River Coalition, was introduced by Dick Plambeck, who is Chairman of the Board of the Passaic River Coalition. Dick mentioned an excellent article which appeared in the Grassroots section of the Daily Record on April 12. Click here to view the article on the work that Ella is doing to protect water supplies. Ella has been involved in the non-profit private organization for 40 years - she started it and is the heart and soul of the organization. In her talk, she told the audience about the organization, the scope of the work and some of the exciting things they are doing right now. Her talk was very interesting and inspired everyone to support this worthy cause.

The Passaic River Basin covers over 985 square miles. It starts in Mendham Township and ends in Newark Bay. There are eight major tributaries and many smaller ones: Whippany, Rockaway, Dead River, Ramapo, Pequannock, Pompton, Peckman, Upper Saddle and Saddle Rivers. To learn more about the Passaic River, visit website http://www.thefullwiki.org/Passaic_River

Ella got involved in establishing the Coalition in 1969 when the Army Corps of Engineers planned to build two huge reservoirs on the Passaic River, one of which would close the Millington Gorge. The other large lake would extend from Chatham Borough to Fairfield. Nearby towns did not want these large reservoirs to be built. She wrote a paper, “Passaic River and its Role - 1970” (a paper which is still relevant today). It relates to improving water quality, controlling flooding, making sure that the water is sustainable for drinking water supplies and basically protecting the public health of the people of the Passaic watershed. This was the starting point for growing the organization.

Ella pointed out that right now we in New Jersey are in a very serious drought. This issue will be addressed by the Coalition as it develops.

The Coalition deals in water and land. There are three basic programs: education, research and public service. There is a land trust, and they use the Green Acres program to buy land. At this time, they are buying a 220 acre parcel in West Millford because it is the most endangered land in the state with the highest ecological benefits. The track has two Bald Eagle’s nests. Today, they have 19 parcels that they want to acquire. Raising funds to purchase land is an important activity. There are over 1000 acres of Coalition land in the Land Trust.

The sewage plants that line the Passaic degrade the quality of water in the river. They are located in the flood plain and should not have been built there. In times of flooding, plants overflow and release raw sewage into the river.

The “Blue Acres” program was started to buy homes located in flood plains in areas like Wayne Twp., NJ so that people can move to a safe home. This was accelerated when Federal funds were used to increase the purchase of homes in the flood plains. The land will now become a park.

The Coalition supports land and buildings of cultural value. They purchased Willow Hall in Morristown and that is now their headquarters. They also support clean-up and improvement of forests near Camp Hope. The number one item picked up in clean-ups is tires.

Another issue is an underground pollution plume caused by a munitions factory in the Pompton Lakes area. The pollution is under 450 homes. People are getting sick. Help is needed.

The Coalition sponsors high school rowing clubs, where students practice rowing on the Passaic. Many graduates have gone on to Ivy League Universities on rowing scholarships.

She invited everyone to join with the Coalition. Members of the audience applauded this excellent talk covering urgently needed environmental work.

To learn more about the Coalition, please visit the website: http://www.passaicriver.org/
Posted by Chatham-Madison Kiwanis at 4/22/2012 10:25:00 AM