Stu Shippey announced that the nut sale is coming to an end and all members are asked to purchase the remaining gift tins. Karen Swartz announced that the CHS Key Club will meet for the last time this year at 7:00 PM on December 21 in the cafeteria. Nancy Boucher still has supermarket cards so please buy them and use them as gifts. Greeting cards were sent to members who have been unable to attend meetings. The December Board meeting will be held right after the regular meeting. Poinsettia table decorations were given out to some of the members attending today’s meeting. 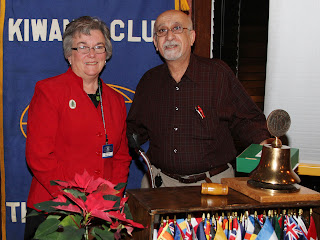 Alan Nekoukar, manager of Charlie Brown’s Restaurant in Chatham Township, was recognized and thanked by President Mary Anne Maloney for the excellent service and food he and his staff provided at Kiwanis meetings today and over the many years. Alan thanked the club members and acknowledged his Charlie Brown’s workers who did such a great job. Alan said that last year Kiwanis posted his photo on website. A long lost friend from 30 years ago, who had moved to California, found Alan because of that photo. The friend found the photo of Alan on the Kiwanis website and called him up. They have now renewed their friendship.