Robert A. Mayers, author of “The War Man” spoke about events of the Revolutionary War 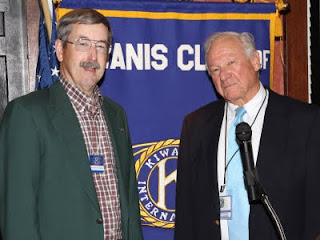 Dick Plambeck (left) welcomed author Bob Mayers, who spoke on the Revolutionary War. He presented a PowerPoint story about his relative John Allison, a Haverstraw, NY farmer who spent the entire war in the Continental Army. His eight years at war took him from Quebec to Yorktown.  For thirty years, Bob researched the life of John Allison and summarized his findings in a very interesting book, which he summarized at the Kiwanis meeting. There are only a few useful journals about the common soldier in the Continental Army. However, there is a rich paper trail of information for soldiers.
John played a role in many of the important battles and met many important generals and leaders.  Bob told an entertaining, fascinating story and was given a big round of applause. Click here to learn more and purchase the book.
Posted by Chatham-Madison Kiwanis at 5/14/2011 11:28:00 AM