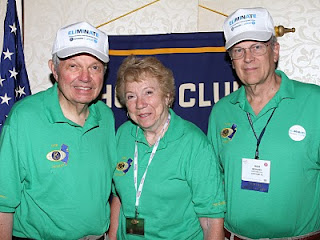 Rich Behling asked Nancy Boucher and Hal Witlinger to stand up to be recognized for attending the Kiwanis International Convention in Las Vegas last weeks. Rich also attended. All three wore green Kiwanis T-shirts and while in Vegas they went to casinos as frogs. Rich said it was beneficial for him to attend the convention and he strongly recommended that members go to the convention next year in Geneva, Switzerland.

Rich is verifying the data for next year’s member directory and he passed around a draft of the directory for comment. He asked all members to review the data and if it is OK, put a check mark beside their name. If not, they should make corrections. If they want to, members can write their cell phone number on the right side of their data.

Tom announced the upcoming Chatham Library Children’s Reading Program picnic on August 19 and he will pass a sign-up sheet around in a couple of weeks.

Mal Kitson announced that the Independence Day parade went off with a lot of success. Both floats were decorated nicely; we had a lot of help. There were only about seven marchers – we could use more. Stephanie Cooperman, who marched with Karen Swartz, said she will try to get Builders Club and Key Club to march next year.

A brief meeting was held following regular meeting to discuss a wine tasting fundraiser.
Posted by Chatham-Madison Kiwanis at 7/10/2010 09:22:00 AM