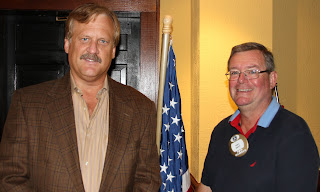 William Styple told Kiwanians in the audience a fascinating tale, which kept everyone interested all the way through the story. Everyone enthusiastically applauded the excellent presentation. To learn more about the book, look it up at Amazon.com.
Posted by Chatham-Madison Kiwanis at 9/15/2013 11:11:00 AM