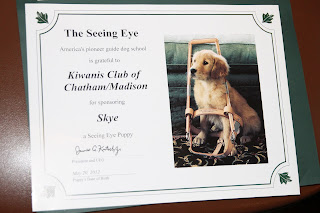 Gary Arnesen handed out posters for the October 18th pasta dinner. Dave Mutcchler announced that a partial nut shipment has been received and he expects the rest to be delivered next week. He recommends asking your children to sell the nuts - his daughter already sold $100 worth. Karen Swartz announced the CHS Key club is tomorrow night 7:00 pm at the cafeteria. Karen Shippey went to the MHS Key Club carwash on Saturday and introduced herself. The Key Club has about 150 members this year, because of the “block system” at MHS. Bob Stannard reported that Drew Circle K will meet with Kiwanis at 8:30 AM this Thursdays to discuss plans for the year. Joan May announced efforts at FDU Madison to start a Circle K club - dues for first year are included in sponsoring club fees. Marc Litwack is chair of an International Committee, Service Leadership Program (SLP) Alumni – Marc is charter chairman. The President of KI said Marc did the best job of any international committee chair – he is “the founding father of SLP Alumni.” SLP includes youth programs. Growing rapidly, they got 10,000 members recruited this year. Key Club International has the highest membership in history, 268,000 members. Circle K is also at its highest membership. Kiwanis has less than 250,000 members. Pat Davidson announced the Randolph Kiwanis antique show on October 19-21. Marty Sechehay announced that the Seeing Eye sent a picture of Skye, a dog Kiwanis is sponsoring which was funded by the Kiwanis pennies for puppies. Two weeks from tonight is the first CPR class at the Squad building. There are still plenty of openings.
Posted by Chatham-Madison Kiwanis at 10/08/2012 05:37:00 AM