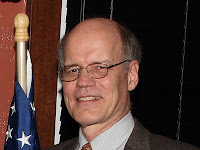 Tim Barrett extended his prior discussion on Conflict Resolution to issues that exist between major global religions. Today there are many religions active in America. In the world today, there is conflict between radical Islam religion and the Western way of life. Other conflict between religions also leads to friction and open conflict.  He mentioned a book: “The Faith Instinct” by Nicholas Wade (who is a science reporter for the New York Times). Click here for website. Wade notes the important role religion has played in all cultures for thousands of years. Religion serves as a way of binding people together in difficult times. Evolution has built religion into who we are as humans and Wade argues that there is a “religious gene.” We are “hard-wired” to be religious people.

Tim also referenced a second book: “The evolution of God” by Robert Kaplan. Kaplan argues that every major religion that has survived has evolved. There is a central, fixed unchanging core, but outside of the core the religion has evolved to grow and be more relevant in the changing world.

What allows religion to speak to people in a such a deep way? It is the powerful symbols. One such symbol is The Sheppard. While Tim recited “The Twenty-Third Psalm”, the room became silent as listeners were drawn into the deep, underlying meaning of the words. God can be known through the experience of thinking about The Sheppard and his sheep.

That Jewish Psalm grew to be embraced by the Christian religion. Jesus tells a story about how the Good Sheppard will help his flock of sheep, no matter what it takes. This same symbol is used over and over, even in the scriptures of Islam. The deep words of the Psalm connect us to people who were our ancestors thousands of years ago. We are bound to people here in the present and to others going far back in time.

The program ended on a positive note. What religions fight about is very superficial in comparison to the deep powerful experiences that unite us together. While there are differences between religions, there are powerful ancient experiences of union that bind us together and make us one.
Posted by Chatham-Madison Kiwanis at 1/30/2011 05:19:00 AM