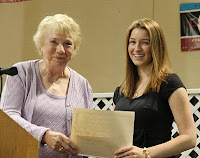 The Madison High School Awards Ceremony was held on June 17 at the Fairleigh Dickinson University Ferguson Center. Two Madison High School graduating seniors received awards from the Madison Kiwanis Club.
Former club president Nancy Boucher presented the Nancy Boucher Service Award to Catherine Turvey. She has done an outstanding job as co-president of the Key Club and has served as a tutor for students learning the English language. 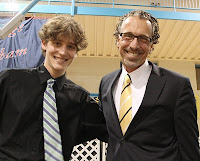 Musician Jerry Vezza presented the Jerry Vezza Award for Outstanding Accomplishment in the Field of Music to Connor Leszczuk. He has excelled as violinist in the MHS Orchestra and is a violinist in the Baroque Orchestra of North Jersey, the NJ Concert Opera and frequently accompanies the Harmonium Choral Society. A former member of the NJ Youth Symphony family of ensembles, he’s been a guest artist of the New Philharmonic of NJ, and has played on occasion with the Livingston Symphony and the Stirling String Ensemble. Connor earned the first place championship in the Mid Atlantic Irish Fiddle competitions twice in a row, and has numerous first place championships under his belt. He can also be seen performing with his family, the musical group "Dugan's Hooligans."
Posted by Chatham-Madison Kiwanis at 6/18/2010 08:25:00 AM