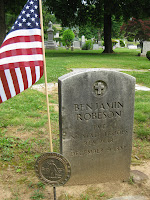 On May 27 twelve members of the Kiwanis Club of the Chathams placed flags at the graves of United States of America Military Veterans buried in Fairmount Cemetery in Chatham Borough. Bob Huntington, past president of Kiwanis Club and Navy Veteran, obtained the flags and organized the work. Members walked among the gravesites looking for metal plaques identifying the Veteran and branch of service. When one was found, a flag was placed beside the gravestone. In 1975 The Chatham post 92 of the American Legion erected a Veteran’s Memorial at the base of the flagpole located in the center of the cemetery. The Kiwanis club placement of Memorial flags has been an annual event for several years.
The photo above, taken by Dick Plambeck, shows a flag placed beside the gravestone for a Revolutionary War veteran. 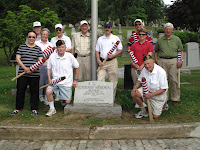 Photo taken by Gary Arnesen shows Kiwanians beside the Fairmount Cemetery Veterans Memorial preparing to place flags beside gravestones of members of the American Armed Forces. Kneeling in the front on the left is Bob Huntington of Chatham and organizer of the event. Kneeling on the right is Herb Ramo. Standing left to right: Melanie Sze, Mal Kitson, Nancy Holt, Jerry Cunningham, Alan Robertson, Dick Plambeck, David Mutchler, Marge Arhens and Monty Montague.
Posted by Chatham-Madison Kiwanis at 5/30/2010 06:30:00 AM