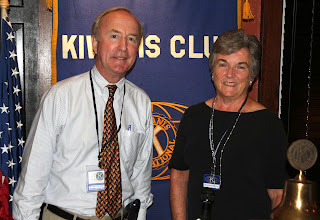 Frelinghuysen thanked Kiwanis for the work they do in their community. He mentioned that he visits many community organizations – “in many ways they are the backbone of the community.” He also thanked the audience for letting him be their Congressional Representative. With Congress out of session this summer, he enjoyed the opportunity to come home to New Jersey and get “out and about” with his constituents.

The feedback he has received is that “a lot of people are struggling”. New Jersey unemployment rate is 9.2 percent and the national rate is 8.3 percent. He said that the percentages don’t tell the whole story, and many qualified people, including recent college graduates, can’t land a job. Member of Congress, regardless of political party, are acutely aware that they have to do something.

He talked about the New Jersey redistricting caused when the number of New Jersey Representatives went from thirteen to twelve.  District 11 now extends into additional areas of Essex County. He has represented six towns in Essex for almost 18 years. Redistricting added many constituents in West Orange, Bloomfield, Montclair, Nutley, Wayne, and other towns. After the November election he will represent close to 730,000 people. He has enjoyed the opportunity to listen to his new constituents.

Frelinghuysen has been working on the House Appropriations Committee. He said that Republicans and Democrats have worked together pretty well over that past two years.
Frelinghuysen heard from constituents that there is a lot of uncertainty and lack of confidence out there. Small businesses are reluctant to hire employees because of uncertainty about the new healthcare law. Also, banks are not lending money. Many realtors have told him that the real estate situation is even worse than the numbers indicate. Many of these problems can be addressed by relaxing overly tight rules and regulations.

After a brief question and answer period, the Kiwanians in the audience gave Congressman Frelinghuysen an enthusiastic round of applause.
Posted by Chatham-Madison Kiwanis at 9/15/2012 11:39:00 AM