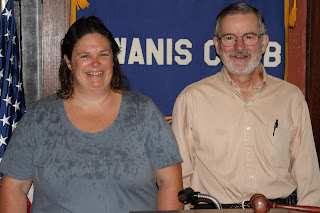 AD Dudderar introduced Jim Malcomb, who spoke on the Civil War, from the perspective of an enlisted man: The Civil War Journal of Private Heyward Emmell. This year marks the 150th anniversary of the start of the American Civil War.

Emmell was a 19-year-old clerk working at a store in Morristown when in 1861 he joined Company K of the 7th Regiment, New Jersey Volunteers. He kept a journal of his 3-year enlistment and fought in many of the major battles in eastern US. The 7th Regiment was organized and led by Colonel Joseph Warren Revere, resident of Fosterfields and grandson of Paul Revere. Emmell was lucky to be led by Revere who was a military man who knew the value of training.

There are 10 Companies in a Regiment, each led by a Captain. Captains were people with money who recruited 100 men. James M. Brown of Chatham was Captain of Company K.  Officers were recruited through the “old-boy” network. Enlisted men were recruited through advertising. Rallies were popular and effective ways to recruit. Women often inspired men to recruit. Posters and newspaper ads were used. Emmell did not say why he joined, but likely reasons are “to save the Union”, “to see the country”, “to find glory in combat” and peer pressure. Pay was $13 per month, a significant motivator at a time when the economy wasn’t very good.

Soldiers spent 60 percent of their time in camp, much of this in the winter. 35 percent was spent on maneuvers – getting ready for battle. 5 percent was spent in battle. Men stayed in tents. They walked, went in boats or on the railroad.

There were hijinks. The war was 4 million men spending 4 years going camping and using guns. Jim gave some examples of tricks played on other regiments.

In battle, troops fired their rifles by rank and Jim described how this can result in almost continuous shooting. There was much smoke and noise. Each soldier carried 40-60 paper cartridges. In a typical battle with 2000 soldiers on each side, there could be 240,000 shots fired. The artillery barrage at Gettysburg was the loudest noise heard in North American until the Atomic Bomb was tested in Alamogordo. Other noises were the bullets hitting objects, cries of wounded and the rebel yells. Smell was terrible.

In the Civil War, 620,000 men died, two thirds due to disease. In 1860, they did not accept the theory that germs caused sickness. Dysentery killed 150,000 men. Typhoid fever killed 100,000 men and many died of pneumonia. Lice were so common they were called “soldier bugs”.

By the end of 1864, it became clear that the South would lose. The first two years, there were plenty of volunteers. In 1863 the draft began. In 1864, some soldiers had fought for three years. By 1863, the nobility of the war was lost. By 1864, the humanity was lost.  Sheridan’s Shenandoah Valley campaign and Sherman’s march through the South are examples of inhumanity. Soldiers used bones of the dead for souvenirs and as firewood for cooking.

The Civil War ended in April 1865. In October 1864 when their 3-year enlistment ran out, the 7th Regiment returned to New Jersey. Emmell did not reenlist and stayed in Morristown. He went to work in the Post Office and started his own picture framing business. He was successful, owned property, and was active in the “Grand Army of the Republic” (an organization similar to American Legion). Emmell was also a volunteer fireman.

Heyward Emmell has a Facebook page - Friend him. A website is under development and will be linked through the Madison Historical Society. Jim handed out business cards for Emmell. The publisher (FDU Press) has set a high price for Emmell’s journal. It is available at Amazon where there is a short preview. Jim will sell copies at his cost.

The members of the audience applauded enthusiastically for this interesting, illustrated, entertaining presentation.
Posted by Chatham-Madison Kiwanis at 9/10/2011 04:58:00 PM