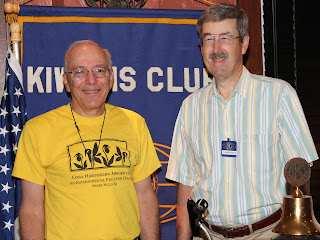 Jim Peck, Executive Director of Cora Hartshorn Arboretum in Short Hills spoke on nature areas in New Jersey. An expert on New Jersey parks, he entertained the audience and left us with ideas for New Jersey places to visit. This talk was an encore performance of his excellent February 22, 2011 program.

Jim is pictured on left (with Kiwanis President Dick Plambeck) wearing his 50-million-year-old New Jersey shark’s tooth fossil necklace. He has visited all USA states except North Dakota. He has written a monthly article for a local newspaper for about seven years.

He showed a photo of a recent visit to the arboretum by a couple who had carved their initials in a Beech tree more than 50 years ago. The two were high school sweethearts in 1960. The heart and initials are still at the same height because lower parts of the tree don’t grow higher over the years.

He reminded the audience about some of places described in his February talk. He travels to specific places with a mission to see and learn about something in particular. He travels light, without climbing or special hiking gear.

Big Brook in Colts Neck has a lot of fossils – he found his shark’s tooth there. Visitors should take kids there because they get excited.  Island Beach State Park is one of his favorite places, anywhere. Palisades Park along the Hudson is also nice.

Great Swamp is where the Passaic River begins. The Swamp has Wildlife Management and Natural areas. He showed a winter photo of Great Falls at Patterson. It has the largest volume of water flowing over a waterfall east of Niagara Falls. He described the geology of the Palisades near Patterson Falls and the historical use of the falls to drive local industries.

He showed a photo of the Eastern USA’s oldest old-growth trees located in Bear Swamp West near Millville, NJ (the South Jersey town has a glass factory).  They are Tupelo trees that are hollow and can grow in water. Go in the winter to avoid insects and better see the size of the trees (no leaves). A lot of mistletoe lives in the same area.  Driving and walking to this site takes a long time.

Franklin, NJ is one of the two places in the world (somewhere in Africa is the other) with highest concentration of minerals. Jim showed photos of the Franklin Mineral Museum and nearby zinc mine (with another museum where you can tour the mine). It is the fluorescent mineral capital of the world and many NJ school children have visited the site. (Nancy Boucher mentioned that the local Kiwanis Club helped run the museum.) You can buy Franklinite samples there.

He also described the Edwin B. Forsythe National Wildlife Refuge in Oceanville, NJ. Also, he showed a photo of the Bamboo Forest in Rutgers Garden.

Jim is looking for donations and volunteer workers to support a boat-building outreach program for kids from Milburn and Union. He showed photos of the project which helps children build 12-foot skiffs.

We ran out of time before Jim ran out of places to talk about. It was a great program and we will have to ask him back again. Jim emailed us the following list of places he described and others we could visit.